Longtime CIA officer Frank Anderson writes today that we should continue to deny clemency to Jonathan Pollard, who was convicted of spying for Israel and sentenced to life in prison two decades ago:

The Pollard clemency pleas are partly based on the close relationship between Israel and the United States. Under this theory, spying for Israel was not serious because it was on behalf of an ally 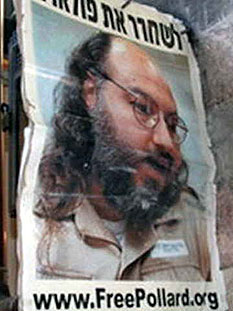 and a friendly government, rather than an enemy of America.

….The essential point is that any nation that steals American defense or intelligence secrets does serious damage to our nation. It might be our friend in many other important ways. In this, it is the enemy. Pollard’s crime would not be less heinous had he committed it on behalf of Canada or Ireland. His betrayal would not be more serious had he acted for Russia or North Korea.

I basically agree with Anderson. In fact, I’d go a step further: spying for a friendly power ought to be punished at least as severely than spying for an enemy. This offends our natural instincts, bit it also makes sense. After all, there are already enormous cultural and conventional reasons that prevent most people from spying for national enemies. I mean, what are the odds that someone in the CIA actually wants to spy for Iran or North Korea?

But friends? It’s pretty easy to convince yourself that maybe you should spy for, say, Israel or South Korea. After all, they’re allies. And they’re in dangerous parts of the world. But precisely because the incentives against spying break down a bit against friendly countries, the legal incentives need to step up. Everyone in the CIA or the military needs to know that if they pass secrets to friendly countries, they’ll be treated at least as harshly as if they’d passed them to enemies.

Unfortunately, this reasoning applies to guys like Bradley Manning too. If he’s convicted of handing classified documents to WikiLeaks, he should be treated pretty harshly.1 It needs to be clear that even — maybe especially — if you think you’re acting altruistically, you’re still going to get hammered. That’s too bad for Manning, for whom I feel at least a bit of sympathy, but it’s hard to see any way around it.

1This ought to go without saying, but apparently it still needs to be said: he should be sentenced harshly if he’s convicted. He hasn’t been yet.