David Carr echoes a familiar lament today: we write the content, but it’s the owners of social networks who are raking in the bucks:

Facebook, Twitter, Tumblr and Quora have been positioned as social networks, but each of them hosts timely content that can also be a backdrop for advertising, which makes them much more like a media company than, say, a phone utility.

….Perhaps content will remain bifurcated into professional and amateur streams, but as social networks eat away at media mindshare and the advertising base, I’m not so sure. If it happens, I’ll have no one but myself to blame. Last time I checked, I had written or shared over 11,000 items on Twitter. 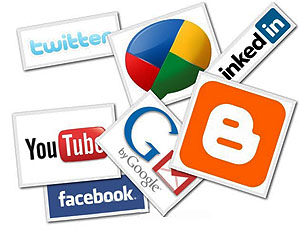 It’s a nice collection of short-form work, and I’ve been rewarded with lot of followers … and exactly no money. If and when the folks at Twitter cash out, some tiny fraction of that value will have been created by me.

Actually, no, I think Facebook and Twitter are still more like phone companies than media companies. The phone company allows people to talk to each other, and charges a monthly fee for doing so. Each little conversation creates some tiny fraction of their value. In our modern age we’ve decided that actually paying overtly for such services is somehow unfair, so instead companies that facilitate conversation make their money via advertising and other related schemes. But they’re still more like utilities than anything else. It’s not advertising that makes a media company a media company, after all: Movies and books are media without advertising and billboards and direct mail are advertising without media.

All the kvetching about social media and people willing to write for nothing misses the point. Sure, blogs and Facebook and so forth provide free content. But there’s always been free and nearly-free content around. The reason non-free content exists is because it’s better than the amateur stuff: journalists dig up news better, La Scala presents opera better, and Broadway puts on shows better than your local community theater. As long as it stays better, people will still pay for it. Period.

Journalism isn’t shrinking because of social networking, it’s shrinking because the internet has made every news outlet available to everyone. American news operations don’t have much in the way of foreign bureaus anymore, but that’s because on a day-to-day basis they don’t provide better content than we can already get from news media actually in foreign countries. Want to know what’s happening in Britain? Surf over to the Guardian or the Telegraph. The Middle East? There’s al-Jazeera. Ditto for just about every other place in the world, which has media of its own that can be mined for information a lot more cheaply than sending an American over to do it in person.

Likewise, American newspapers have declined because, really, how many newspapers do you need? You need one for local news, but for national and international news? Why bother? There are half a dozen really good sources available on the internet now, and that’s all anyone needs. Why read the AP dispatches in the Detroit Free Press if you can just power up your browser and read the New York Times and McClatchy and the Wall Street Journal instead?

So blame the internet, which has made competition from other professionals far stiffer than in the past. But the amateurs chattering away on Facebook? Not so much.