Atrios disagrees with my contention that a deal on Social Security could put it into balance for a good long time:

Social Security Will Never Be In Actuarial Balance

Not for more than a couple of years, anyway. If there’s some deal to get there, then inevitably the Social Security Trustees will, perfectly justifiably, tweak a few assumptions about future economic activity so that there will be a DOOM scenario, an EVERYTHING’S AWESOME scenario, and a “uh oh maybe in about 40 years we will have a problem” scenario. And then Fred Hiatt will print another 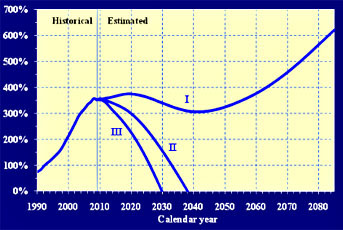 million ZOMG WE MUST DESTROY SOCIAL SECURITY NOW IN ORDER TO SAVE IT FORTY YEARS FROM NOW columns and some future president will marvel at those worthless IOUS and blah blah blah.

I don’t really want to get into a blogspat over this, but this just isn’t right. It’s true that the Social Security Trustees normally produce three scenarios for future solvency (the 2010 version for trust fund solvency is on the right), but even critics almost universally use the intermediate scenario when they write about Social Security’s finances. There’s actually a plausible case to be made that the optimistic scenario has historically been closer to reality, but nonetheless, it’s the middle scenario everyone uses. Even Fred Hiatt.

As for the actuaries making tweaks to their economic models, they do indeed do this. But if you look over trustees reports for the past 20 years you’ll see that those tweaks have been small, have pushed in both directions, and have had only a tiny net effect on their projections. Obviously that could change in the future, but on past performance there’s no real reason to think that tweaks to the forecast models will produce large changes to the forecasts themselves.

Needless to say, nothing is forever. Once we create food in replicators and have robot slaves to do all our work for us, I suppose no one will care about Social Security at all. But it’s entirely possible to cut a deal on Social Security that will insure its long-term solvency for at least several decades, and that’s about as much as anyone can ever hope for in real life.

And as long as I’m writing about this again, I’ll reiterate a couple of points. First, the idea here is not that hardcore conservatives will stop attacking Social Security if a deal is reached. The idea is that they’ll be ignored once they lose the support of centrist Beltway opinion — which they will if the intermediate trustees forecast shows the program in balance. Second, my support for a deal obviously depends on reaching a good deal. If Republicans refuse to consider revenue increases, then no deal. If they insist on means testing or increases to the retirement age, then no deal. Etc. But there are decent compromises available, and we should be just as willing to explore them as we are to reject deals that aren’t good enough.