My sense is that Americans remain much more polarized on cultural and religious questions than they are on economic policy, which suggests that some of the apparent polarization we see on an issue like health care has less to do with the “markets versus government” debate referenced by Scheiber and others, and more to do with the way our divisions on more existential issues create a general climate of mistrust. It isn’t a coincidence that the health care debate burned hottest around two issues — abortion and end-of-life care — that were relatively tangential to the main purpose of the bill….The key question was whether they could trust a health care overhaul conceived and implemented by people — liberals and Democrats, 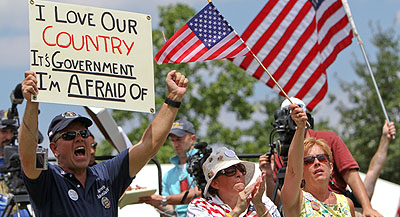 that is — whose views about life-and-death issues like abortion and euthanasia were radically different from their own. And the answer, perhaps not surprisingly, was no.

I don’t have a long, data-filled essay to offer up here, but I suspect this is quite wrong. My recollection is that abortion became a big issue only fairly late in the healthcare debate, long after the battle lines had been fully and loudly drawn. It was always Obama’s “takeover of one-sixth of the economy,” or Obama “telling you which doctor you can see” that was at the heart of the conflict. Even the death panel nonsense was pretty obviously just an opportunistic carbuncle added to an already raging fight.

I actually think there’s an extent to which we should take tea partiers at their word: they’re concerned more about economic and regulatory issues than they are about cultural issues. After all, with the exception of abortion, take a look at the usual constellation of hot button culture war topics. They’re all still hot buttons, but gay rights have made enormous mainstream strides; gun control is practically a dead letter (despite the NRA’s desperate efforts to pretend otherwise); church-state issues have been about 90% resolved and mostly crop up these days in dumb sideshow debates; and drug-related issues don’t break neatly down on a left-right dimension. I’m not trying to make any kind of maximal case here — immigration is still a pretty blood-boiling issue, for example — but it does strike me that to an unappreciated extent Obama has been able to avoid culture war issues partly because they simply have less salience than they did in the past. To a large extent, our tribal affiliations really are defined more strongly these days by our views on taxes and regulation and public sector unions and so forth.

I guess I’d offer this more as a provocation than anything else. I’m not entirely sure I’m right about this. But it’s worth a thought. The culture wars really aren’t what they used to be.