“Inequality, Leverage and Crises,” an IMF paper written by Michael Kumhof and Romain Rancière, is full of long equations populated by many Greek letters. I won’t even pretend that I can evaluate it. However, their introduction is pretty easy to understand: they’ve constructed a simple model for financial crises that essentially proposes the following narrative: (a) growing inequality produces 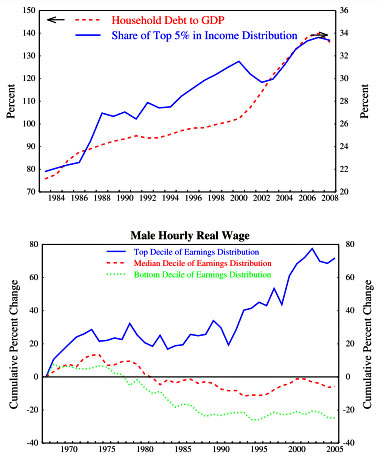 less money for the middle class and more money for the rich, (b) the rich loan much of this money back to the middle class so they can continue to improve their living standards even with stagnant incomes, (c) the financial sector balloons to mediate all this, and (d) the system eventually collapses since, after all, this kind of thing can’t last forever. Here it is in their words:

The United States experienced two major economic crises over the past century — the Great Depression starting in 1929 and the Great Recession starting in 2007. Both were preceded by a sharp increase in income and wealth inequality, and by a similarly sharp increase in debt-to-income ratios among lower- and middle-income households. When those debt-to-income ratios started to be perceived as unsustainable, it became a trigger for the crisis.

….The key mechanism is that investors use part of their increased income to purchase additional ?nancial assets backed by loans to workers. By doing so, they allow workers to limit their drop in consumption following their loss of income, but the large and highly persistent rise of workers’ debt-to-income ratios generates ?nancial fragility which eventually can lead to a ?nancial crisis. Prior to the crisis, increased saving at the top and increased borrowing at the bottom results in consumption inequality increasing signi?cantly less than income inequality. Saving and borrowing patterns of both groups create an increased need for ?nancial services and intermediation. As a consequence the size of the ?nancial sector, as measured by the ratio of banks’ liabilities to GDP, increases.

The crisis is characterized by large-scale household debt defaults and an abrupt output contraction as in the 2007 U.S. ?nancial crisis. Because crises are costly, redistribution policies that prevent excessive household indebtedness and reduce crisis-risk ex-ante can be more desirable from a macroeconomic stabilization point of view than ex-post policies such as bailouts or debt restructurings. To our knowledge, our framework is the ?rst to provide an internally consistent mechanism linking the empirically observed rise in income inequality between high income households and poor to middle income households, the increase in household debt-to-income ratios among the latter group, and the risk of a ?nancial crisis.

Needless to say, I find this extremely persuasive. That doesn’t mean it’s true, though. Hopefully lots of smart economists will seriously grapple with this and figure out if it really does explain a big part of what happened during the aughts.