A group of atheists recently managed to scrounge up $2,400 to put ads on four municipal buses in Fort Worth. The New York Times reports:

The reaction from believers has been harsher than anyone in the nonbeliever’s club expected. Some ministers organized a boycott of the buses, with limited success. Other clergy members are pressing the Fort Worth Transportation Authority to ban all religious advertising on public buses.

….The ads have incited anger in some places. Vandals destroyed two bus ads in Detroit, ruined a billboard in Tampa, Fla., and defaced 10 billboards in Sacramento. One billboard in Cincinnati was taken 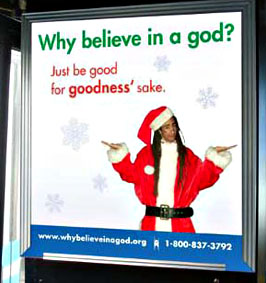 down after the landlord received threats….But nowhere has the reaction of believers been so forceful as in Fort Worth, to the delight of Fred Edwords, the national director of the United Coalition of Reason.

….Some of the fiercest criticism has come from black religious leaders. The Rev. Kyev Tatum Sr., president of the local Southern Christian Leadership Conference, has called for a boycott of the buses, saying the ads are a direct attack during a sacred time in the Christian calendar….While Mr. Tatum and about 20 other pastors have urged their congregations to avoid the buses, a smaller group met recently with the transportation authority’s president to demand that the policy allowing religious advertising on buses be reversed Wednesday at a meeting of the authority’s board. The bus system in nearby Dallas bans all religious ads.

Religious people sure are touchy. They don’t seem to mind competing with each other, so what’s the problem with competing against atheism? Seems like a fair fight to me.

But this is what happens whenever a minority group of any kind tries to demand reasonable treatment: the majority group instantly takes it as a vicious, personal attack. The same dynamic played out when it was blacks vs. whites, men vs. women, or gays vs. straights. Acceptance of a minority group on equal terms is almost universally deemed threatening to a majority group that considers its superior status to be something akin to natural law. Welcome to the latest incarnation of the culture wars.