The WikiLeaks release of 251,000 U.S. embassy cables is, I’m told, a “diplomatic crisis.” Hillary Clinton is running point on damage control. Foreign allies are on high alert. Life will never be the same. So what’s in those 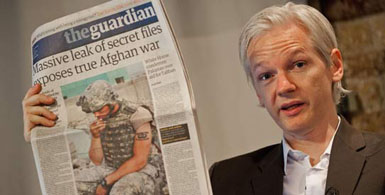 Grave fears in Washington and London over the security of Pakistan’s nuclear weapons programme…. Suspicions of corruption in the Afghan government….The extraordinarily close relationship between Vladimir Putin, the Russian prime minister, and Silvio Berlusconi, the Italian prime minister….Allegations that Russia and its intelligence agencies are using mafia bosses to carry out criminal operations….Inappropriate remarks by a member of the British royal family.

Say it ain’t so! Corruption in the Afghan government? Silvio Berlusconi is a douche? Prince Andrew said something naughty? Pass the smelling salts. But maybe the New York Times has more. Here’s their list:

A dangerous standoff with Pakistan over nuclear fuel….Gaming out an eventual collapse of North Korea….Bargaining to empty the Guantánamo Bay prison….Suspicions of corruption in the Afghan government….Mixed records against terrorism….Arms deliveries to militants….Clashes with Europe over human rights.

Oh, and the Saudis would like us to bomb Iran, thankyouverymuch. Yawn. Even Der Spiegel, which excels at finding the most sensational spin possible on this kind of thing, was pretty much stumped:

What, though, do the thousands of documents prove? Do they really show a US which has the world on a leash? Are Washington’s embassies still self-contained power centers in their host countries?

In sum, probably not. In the major crisis regions, an image emerges of a superpower that can no longer truly be certain of its allies — like in Pakistan, where the Americans are consumed by fear that the unstable nuclear power could become precisely the place where terrorists obtain dangerous nuclear material.

Andrew Sullivan actually thought the cables showed that the State Department is on the ball: “Overall, I have to say that this brief glimpse into how the government actually works is actually reassuring. The cable extracts are often sharp, smart, candid and penetrating. Who knew the US government had so many talented diplomats?”

Now, I did leave a few things out. There’s some interesting stuff about the Chinese Google hack, some frank and candid military assessments of British troops in Afghanistan, a bit of Israeli bluster about bombing Iran (though it’s nearly identical to Jeffrey Goldberg’s very public piece in the Atlantic a couple of months ago), and confirmation that embassy officials often try to spy on people in their host countries. And the Turkish government is probably going to be pretty pissed at us for a while. Still, this is hardly sensational stuff. In fact, what’s really struck me so far is how little our diplomats talk out of school in private cables.

Maybe there’s more to come on this,1 but so far I just don’t see these leaks causing an epic amount of damage. Obviously feelings will be bruised by the blunt language in some of the cables — though if Spiegel’s excerpts are typical, the language is only slightly blunter than your run-of-the-mill anonymous carping — and foreign officials might be reluctant for a while to share confidences with American diplomats. And just as obviously, the United States would really prefer that its confidential cables remain confidential. Hillary Clinton will indeed have her hands full for a while. But honestly, there’s hardly anything here that I haven’t already read on the front pages of multiple newspapers. Titillating, but not much more.

1In fact, Blake Hounshell tweets: “Anyone who thinks this batch of WikiLeaks docs is not interesting clearly isn’t reading them.” Marc Lynch agrees: “Guardian + NYT undersold them.” So maybe there really is more to come. The three English-language accounts, however, just don’t make this stuff seem especially earthshaking.