Matt Yglesias on the conservative love affair with Ireland during the Bush era:

I wouldn’t try to blame their property crash on low tax rates. But by the same token a frightening number of pundits went “all-in” on the idea that Ireland’s conserva-friendly tax policies were behind a boom that was in fact driven by a real estate bubble. There needs to be some accountability for this, because it appears to quite genuinely be the case that relaxed financial 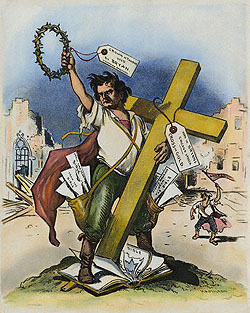 regulation is a can’t-lose strategy for (temporarily) attracting financial inflows, sparking an asset price bubble, and boosting growth. But that doesn’t mean countries should do it. And we need a system of international praise and esteem that’s not so blind to these issues.

Italics mine. Good luck with this. I’ve never spent too much of my energy on the Dean Baker-ish crusade about how we keep listening to all the people who got everything wrong during the aughts, but that’s mostly just a matter of writing temperament, not because I disagree with him. But it’s getting harder and harder not to jump on the bandwagon. I mean, we’ve now got mainstream Republicans suggesting we should (kinda sorta) go back on the gold standard, we’ve got conservative economists who believe we should raise interest rates because inflation is our biggest worry right now, and we’ve got a victorious GOP that thinks spending cuts and deregulation are the key to prosperity — all aided and abetted by an economically illiterate pundit class seemingly convinced that accounting identities are just guidelines and the federal government should be run the same way you and I run our family budgets.

I mean, it’s almost as if the entire scientific community agreed about the fundamental chemical and thermodynamic reality of GHG-induced global warming but instead we listened to a bunch of cranks who — oh wait. We are listening to them, aren’t we?

Never mind. I’ll just retreat back into my cave now. Somebody send up a flare when it’s safe to come back out.