Josh Marshall realized today that he didn’t really know much about the New START treaty, so he made some phone calls to get up to speed. His report:

Have you heard this? Russia still has a massive strategic nuclear arsenal with pretty much the exclusive goal of being able to devastate the United States and kill pretty much all of us. For 15 years we had pretty robust right to inspect 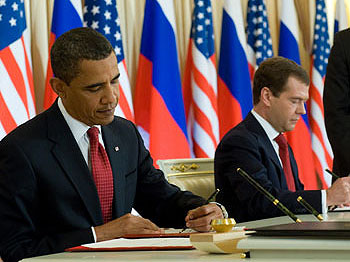 their arsenal many times a year, make sure they only had as many as they were allowed under our treaties and actually get up on the delivery missiles themselves and look at the payloads? Now we don’t. In fact, we haven’t since December 5th of last year.

At first that wasn’t that big a deal. Not much can happen in a few weeks or few months. But now it’s been almost a year. So all that trust but verify stuff Ronald Reagan was so into? Well, now we can’t verify. And for as much as you’re worried about some Muslim guy blowing up a plane and killing a few hundred people, these are weapons designed to kill hundreds of millions of people. Do you feel more secure knowing we’re just taking everything on faith from the Russians? Or that our intelligence on their missile designs and practices is growing older by the day?

As it happens, yes, I have heard all this. But I think Josh is right: most people don’t have a clue. And it does indeed seem like a massive messaging fail by the White House that they haven’t been focused obsessively on pushing this message at every opportunity. Forget all the other aspects of the treaty. Forget the reduction in warheads, the reduction in ICBMs, or the reduction in heavy bombers. Forget about the quality of our relationship with Russia and its role in reining in Iran’s nuke program. If there’s anything that people ought to understand, it’s that the treaty restores our ability to inspect and verify the Russian nuclear arsenal.

I’ve spent some time reading the technical objections that conservatives have to New START, and they’re pretty inscrutable. Mostly they either strain the language of the treaty beyond recognition (to claim it obstructs missile defense, for example), criticize something the treaty doesn’t even cover (tactical nukes, targeting strategies), object to provisions that both the military and the intelligence community say are fine (telemetry protocols, launch vehicle IDs), or simply rail against the whole idea of signing arms control treaties in the first place — as conservatives have done pretty much forever. There’s practically nothing concrete to any of it.

But if we don’t approve the treaty, we’ll lose our ability to verify Russian nukes completely. That’s about as concrete as you can get.