I don’t remember where I first saw this, but Ahmed Rashid’s two-hour interview with Afghan president Hamid Karzai, someone he’s known for 26 years, is essential reading:

Afghan president Hamid Karzai is a changed man. His worldview now is decidedly anti-Western….By the end of our talk, it was quite clear to me that his views on global events, on the future course of NATO’s military surge in southern Afghanistan, and on nation building efforts throughout his country have undergone a sea change. His 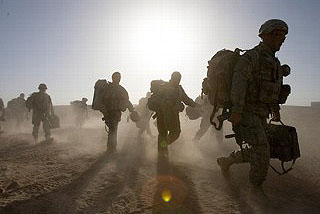 single overriding aim now is making peace with the Taliban and ending the war—and he is convinced it will help resolve all the other problems he faces, such as corruption, bad governance, and the lack of an administration.

….He no longer supports the war on terrorism as defined by Washington and says that the current military surge in the south by the United States and its NATO allies is unhelpful….Karzai also maintains that there is a political alternative to NATO: much more of the onus could be placed on countries in the region—especially Iran and Pakistan—to end the war and help reach a settlement with the Taliban. Senior Western and Afghan officials in Kabul say Iran has stepped up its support to the Taliban in western Afghanistan in recent months, possibly as a bargaining chip for future talks on a peace settlement. For its part, Pakistan, where the entire leadership of the Taliban is based, wants a leading part in any talks that NATO or Karzai may have with the Taliban. Yet Karzai told me that in the last six months neither Iran nor Pakistan has provided any substantive support to facilitate peacemaking.

There have been several reports recently suggesting that Karzai has given up on the U.S., followed by other reports that, no, he really hasn’t. But Rashid’s interview, which is the deepest and clearest that I’ve seen, seems to confirm that the earlier reports were the real deal. Karzai really has definitively wearied of the U.S. presence and really would like us to leave.

He hasn’t insisted, of course, because his government would almost certainly collapse within weeks or months if NATO weren’t around to prop it up. Beyond that obvious reality, there’s also an odd strain of delusion here that I’m surprised Rashid didn’t follow up on: namely Karzai’s contention that Iran and Pakistan should help end the war and reach a settlement with the Taliban. That may be true, but as Karzai himself points out, neither country appears to have any serious motivation to do so. Apparently he thinks Iran and Pakistan could somehow take NATO’s place, even though he acknowledges that neither has been helpful, and neither really shows any signs of being helpful in the future.

From the U.S. point of view, of course, they key thing isn’t whether Karzai is tired or delusional or getting bad advice. What really matters is that over the past year he’s apparently come to the firm conclusion that a continued U.S. presence is unhelpful. This pretty plainly makes our military efforts in Afghanistan pointless. As Gen. Petraeus and his counterinsurgency gurus continually tell us, political support is crucial to eventual success. If we don’t have it — and it’s now about as clear as it can be that we don’t — then all the Lisbon conferences in the world won’t produce a plan for victory. It’s about time for Barack Obama to start leveling with the American public about this.