Is the GOP paying for ad space on the Washington Post’s front page these days? Check out this story today:

Last year, even as he struggled through the worst of the recession, Chris Upham said revenue at his District-based real estate and construction businesses doubled — allowing him to hire two agents.

But Upham said he hasn’t increased his staff thus far in 2010 and he doesn’t expect to for the remainder of the year. That’s because his taxes rose sevenfold.

….The White House appears poised to respond to a growing backlash from businesspeople about the crush of higher taxes. Among the ideas being explored were a temporary payroll-tax holiday and permanent extension 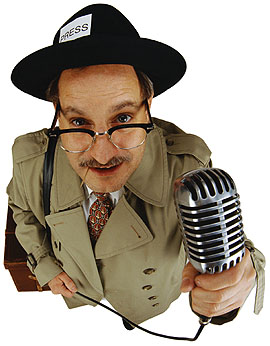 of the expired research-and-development tax credit, ways to offset the impending elapse of tax cuts for the top 2 percent of households.

Italics mine. There’s nothing intrinsically wrong with running a story about higher taxes or new regulations, but only if there really are higher taxes or new regulations to complain about. However, the story has nothing — literally nothing — about any recent tax increases on businesses. I have no idea why Upham’s taxes rose, but I can only guess that perhaps he paid virtually nothing last year and then paid seven times that much this year as his income went up. So maybe his taxes went from $100 to $700, or something like that. But who knows? Post reporter V. Dion Haynes just credulously quoted Upham and apparently didn’t bother to ask anything further. So we have no idea where these illusory new taxes are coming from.

As for regulations, that’s equally mysterious. Upham himself suggests that his hiring plans are due more to a real estate slowdown caused by the end of the homebuyer’s tax credit than anything else. So what else is there? We’re told that Obama’s small business loan program has been “wildly popular.” We’re told that hiring mostly depends on boosting consumer spending. We’re introduced to Luc Brami, who was delighted with the $9,000 payroll tax break he got from an Obama program to spur hiring of the unemployed. We’re told that, “In all, the administration has implemented about a dozen small-business programs, including a health-care tax credit; more opportunities for women business owners to receive government contracts; and cuts in capital gains taxes.”

So where’s the actual problem? Well, there’s a quote from a flack for the right-wing National Federation of Independent Business complaining about future provisions from healthcare reform. There’s another quote from a flack complaining about a new regulation regarding 1099 reporting requirements. And there’s a guy from a government contracting firm who doesn’t plan to take advantage of the payroll tax break because it doesn’t offset the entire salary of a new employee.

That’s it. The 1099 thing is probably legit, but aside from that there are no new taxes documented in the piece and no evidence of burdensome new regulations. None. So what’s going on? Surely if things were as bad as the flacks say they are, it would have been pretty easy to find plenty of good examples? Especially since I’m sure it was the flacks who produced the business owners quoted in the story in the first place.