I think Jonah Goldberg is right that the supposed “civil war” between the tea parties and the GOP establishment is mostly just a made-up media narrative: 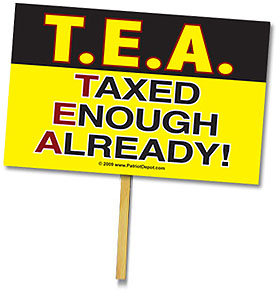 It takes two to tango, and it takes two to fight a civil war. What seems lost on a remarkably diverse group of observers and political combatants, on the left and the right, is that there are no worthy Republican opponents to the tea parties. Among the Republican leadership or the “conservative establishment,” you will not find a single full-throated critic of the tea parties.

….Both the GOP leadership and the major conservative outlets enthusiastically support Marco Rubio in Florida, Pat Toomey in Pennsylvania, Sharron Angle in Nevada (after some initial concerns) and Joe Miller in Alaska. Even supreme RINO John McCain won not by vilifying the tea parties but by claiming to join them, an approach more sincerely and successfully followed by other GOP candidates across the country.

Meanwhile, Rubio and Toomey chased moderates like Charlie Crist and Arlen Specter clear out of the Republican Party. And now Miller has pretty much done the same with Alaska Sen. Lisa Murkowski, who in a sad attempt to cling to power announced that she will run as a write-in candidate come November. Mitch McConnell, the Senate Republican leader, immediately moved to excommunicate Murkowski, stripping her of all her seniority and leadership positions.

In all three cases the “establishment” has said to the moderates, “Don’t let the door hit you on the way out.” And how have they responded to the allegedly barbaric, uncouth, tea-fueled hordes storming the Beltway castle? “Lower the drawbridge!”

Yep. This might change in the future, but for all practical purposes the tea party movement is the Republican Party right now. And the tea partiers aren’t just a bunch of newbies getting involved in politics for the first time in their lives. They’re rapidly becoming part of a richly funded, highly professional organization:

Leaders of the Atlanta-based Tea Party Patriots announced a $1 million donation Tuesday, from an anonymous single contributor….FreedomWorks, which is headquartered in Washington and endorsed 25 House and Senate candidates during the primary season, said it will expand that list to more than 80. The Tea Party Express, based in Sacramento, is planning its largest national bus tour at the end of October to get conservatives to the polls.

….The new push illustrates the movement’s transformation since the primaries from a disorganized coalition of fiscally conservative activists to a measurable political force. But the tea party’s rapid growth — along with the influx of cash and political professionals — has led some followers to worry that it risks losing its rebel spirit.

….”There is no question the movement has changed,” [says Judson Phillips, founder of Tea Party Nation]. “The evolution of ‘Big Tea’ is the logical result of where this movement must go.”

I don’t know what this means for the future. My guess is that the tea parties will successfully push the GOP further to the right this year and then effectively cease to exist as they get entirely coopted by the Republican establishment and existing movement conservative organizations. “Big Tea” may be the logical endgame, but the emphasis there should be on big, not on tea.

POSTSCRIPT: And while we’re on the subject, can we please knock off the faux surprise that tea partiers aren’t just a bunch of deficit hounds? Of course they’re opposed to gay marriage and abortion and illegal immigration and in favor of gun rights and prayer in school. Come on, people.