Matt Steinglass is in Amsterdam, and he’s pleased to find that his daughter can swim in the Amstel River if she wants. “If I’d tried letting my daughter do this in, say, the Potomac River in Washington, DC,” he says, “I would have likely been arrested.” 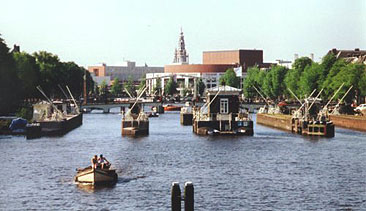 Why the difference? Because in America everyone is afraid of getting sued, so they insist on putting in place ever more restrictive rules on what we are and aren’t allowed to do:

The reason you can [swim freely in public waters] in the Netherlands is that if anybody tried to sue the city of Amsterdam because they or their child had been injured while swimming in the river, the suit would almost certainly be dismissed….Essentially, you still have the freedom to swim in the river in Amsterdam because people assume you have the common sense to avoid stupid behaviour, like diving in when you don’t know what’s underneath, or not keeping to the sides of the river during barge traffic hours. And if you don’t, it’s nobody’s fault but your own.

But there’s another reason why I can let my daughter swim in the Amstel, and that is that I’m pretty sure that in a well-regulated country like the Netherlands, the water is reasonably free of heavy pollutants and raw sewage. (I would not, for example, let her swim in the Mekong.) This, I think, outlines a useful distinction between different kinds of regulation….To generalise: for risks I can assess myself, I don’t want regulations that prevent me from doing as I please just because I might end up suing the government. For risks I can’t assess myself, I do want regulations that give me the confidence to do as I please. One kind of regulation stops me from swimming in a pond in Massachusetts. The other kind lets me swim in a river in the Netherlands. One kind of regulation makes me less free. The other kind makes me freer.

It’s worth digging into this a bit. Why is America more litigious than Europe? With the obvious caveat that not every country in Europe does things exactly the same way, here are a few reasons:

Long story short, this difference between Europe and the U.S. is so deeply rooted that it’s not likely to change — and it’s not really due to a national culture that promotes a refusal to accept personal responsibility or anything like that. It’s mostly institutional in nature, and the incentives of our institutions point in the direction of more lawsuits instead of more regulations. Conservative tort reform advocates are huge fans of implementing a European-style loser pays rule in America, and I might be too if they were willing to make the other half of the bargain and support European-style regulation and enforcement designed to make our institutions safer and fairer in the first place. But they’re not.