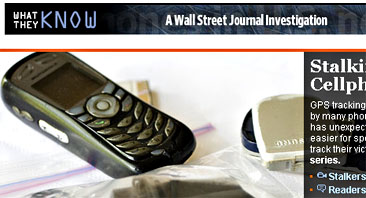 The Wall Street Journal is running a good series this week on privacy in the digital age called “What They Know.” This is from their piece today on cell phone tracking:

Global-positioning systems, called GPS, and other technologies used by phone companies have unexpectedly made it easier for abusers to track their victims. A U.S. Justice Department report last year estimated that more than 25,000 adults in the U.S. are victims of GPS stalking annually, including by cellphone.

….There are various technologies for tracking a person’s phone, and with the fast growth in smartphones, new ones come along frequently. Earlier this year, researchers with iSec Partners, a cyber-security firm, described in a report how anyone could track a phone within a tight radius. All that is required is the target person’s cellphone number, a computer and some knowledge of how cellular networks work, said the report, which aimed to spotlight a security vulnerability.

The result, says iSec researcher Don Bailey, is that “guys like me, who shouldn’t have access to your location, have it for very, very, very cheap.”

If you don’t want to be tracked and think you might be, remove the battery from your phone. That’s what domestic-violence shelters do: “As soon as victims arrive at shelters run by A Safe Place, ‘we literally take their phones apart and put them in a plastic bag’ to disable the tracking systems, says Marsie Silvestro, director of the Portsmouth, N.H., organization, which houses domestic-violence victims in secret locations so their abusers can’t find them.”

More generally, though, what do they know? The answer is: a lot. Probably more than you think, and the Journal’s series is a good reminder that if you care about privacy, you should care at least as much about the private sector as you do about the government. Beyond cell phones, the Journal uncovers plenty of other good stuff too. For example, here’s a story about the skyrocketing use of browser cookies to track your movements across the internet, and here’s a graphic that shows which sites are the biggest abusers. The winner? Dictionary.com, with msn.com and comcast.net not far behind. Wikipedia is the only site they surveyed that uses no tracking cookies at all.