Dave Weigel provides a blast from the past this morning: the Dubai Ports World controversy. Remember that? DPW, owned by the government of Dubai, wanted to buy the port operations of P&O, which would have given them control over portions of several U.S. ports. George Bush was in favor of the deal, Chuck Schumer went ballistic at the 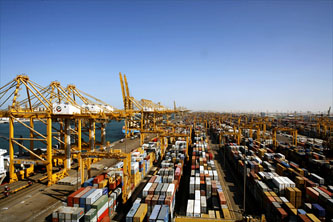 thought of a bunch of Arabs controlling the docks at some U.S. ports (including New York’s), and the general liberal reaction seemed to be that it was about time Bush got a taste of his own medicine. And maybe it was. But I didn’t buy it:

Encouraging the xenophobic jingoism that’s driving this controversy is a little too much for me. Unless there are serious substantive reasons to oppose this deal, I’m not willing to jump on the bandwagon solely because it’s an opportunity for some righteous Bush bashing….I’d prefer to walk the liberal internationalism walk instead of jumping ship for short term political gain. I’ve said before that engaging seriously with the Arab world is the best way of fighting terrorism, and I meant it. This is a chance to do exactly that.

….UPDATE 2: The whole thing feeds on a mindless anti-Arab jingoism that’s genuinely dangerous, and that’s why I’m not joining the fun unless I hear some really good reasons for doing so. As liberals, we’re either serious about engaging with the Muslim world in a sensible, non-hysterical way or we’re not. Which is it?

The parallels with the mosque controversy are eerie.  Both involved proximity to Ground Zero (the World Trade Center was owned by the Port Authority of New York and New Jersey and the DPW deal included some port operations in New York harbor). Both elicited no controversy at first and the DPW deal was initially welcomed by the port authorities in the affected cities. Both involved the Muslim community. Both were vaulted into public consciousness by politicians seeking partisan advantage during an election year. And both, needless to say, appealed mostly to mindless xenophopia and “war of civilizations” nonsense.

POSTSCRIPT: By the way, do you wonder what ever happened to the DPW deal? Well, P&O’s deal with DPW went through, but the blowback in the U.S. forced DPW to dispose of its American subsidiary. (No other country had a problem with them.) And who did they dispose of it to? Well, after a bit of shopping around they finally sold their U.S. port operations to — wait for it — AIG. So now those port operations are essentially owned by the United States government — i.e., you. It actually might be a nice asset to sell in order to raise money to pay back taxpayers for AIG’s 2008 bailout, but who’d want to buy it now? The fuss in 2006 probably scared everyone off.