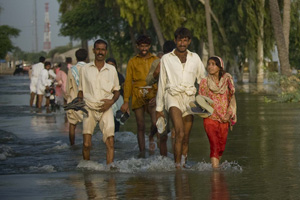 It’s unfair to call Bjørn Lomborg a climate skeptic even if he did write a book called The Skeptical Environmentalist. He believes in global warming, after all. He just thinks it’s not our biggest problem right now, and in any case, we can simply adapt to it when it happens. Here he is a couple of days ago on the possibility of a large rise in sea level over the next century:

Here are the facts. A 20-foot rise in sea levels […] would inundate about 16,000 square miles of coastline, where more than 400 million people currently live. That’s a lot of people, to be sure, but hardly all of mankind. In fact, it amounts to less than 6% of the world’s population — which is to say that 94% of the population would not be inundated. And most of those who do live in the flood areas would never even get their feet wet.

That’s because the vast majority of those 400 million people reside within cities, where they could be protected relatively easily, as in Tokyo. As a result, only about 15 million people would have to be relocated. And that is over the course of a century. In all, according to Nicholls, Tol, and Vafeidis, the total cost of managing this “catastrophe” — if politicians do not dither and pursue smart, coordinated 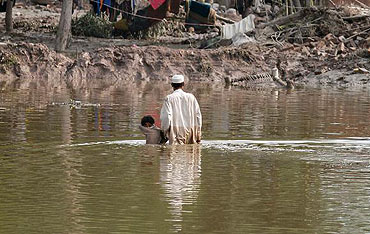 It’s a beguiling premise. Only $600 billion a year! And all it depends on is politicians pursuing smart, coordinated policies.

But there’s something missing from this equation: namely that the money is largely going to have to be spent in some of the poorest countries on the planet, and it’s going to have to come from the richest. But will rich countries be willing to pony up even a fraction of this $600 billion a year? Or will they take a look at each catastrophe separately and take refuge in the mantra that no individual event can be blamed on global warming?

I’d guess the latter. But if Myles Allen of the University of Oxford and some of his colleagues have their way, this excuse is going to get harder and harder to make:

In 2004, Allen and his colleagues showed to a high level of confidence that human greenhouse gas emissions had at least doubled the risk of the European heatwave of 2003 occurring….Kevin Trenberth of the National Center for Atmospheric Research in Boulder, Colorado, thinks similar analyses should be done within weeks of an event. For instance, we know that high sea-surface temperatures and large amounts of moist air over the Indian Ocean helped bring about the Pakistani floods and the heatwave in Russia. It should be possible to determine how great a role human climate change played in these events, Trenberth says.

Allen’s team hasn’t analyzed the Pakistani floods yet, and climate deniers will point out that Pakistan has had plenty of floods in the past. But what if Allen’s models show, say, that climate change doubled the chance of this month’s disaster in Pakistan? Does that mean that rich countries ought to bear half the cost of dealing with it? Probably. But just last week the UN reported that “donor fatigue” was hampering aid efforts and that they had raised only a third of the $459 million needed for initial relief. If two or three disasters in a single year makes it hard to raise even a measly half billion dollars for Pakistan’s worst flooding in decades, what are the odds of rich countries coming up with anything close to $600 billion each and every year for the next century?

Slim and none. Given the political realities, adaptation is certain to be a necessary part of our strategy for dealing with climate change. But political realities — not to mention physical, chemical, and ecological ones — also make it clear that adaptation alone is a chimera. Citizens of rich countries will never be willing to spend enough on their poorer neighbors to mitigate the damage of climate change even if the necessary amount is “only” one percent of global GDP. The fact remains that the likely damage from climate change is so severe, so varied, and so unpredictable that the only sensible policy is to spend money to try to prevent it in the first place. Short of a massive technical breakthrough in clean energy production, this simply isn’t likely to change. The faster we reconcile ourselves to it, the better.