A few days ago Jonah Lehrer pointed to a new paper by Flavio Cunha and James Heckman about the value of intensive preschool education. Their conclusion: this is a great way to spend money. But here’s the catch: critics of early education programs often point out that reported IQ gains don’t last. And that’s true (though there have been a few exceptions). But IQ isn’t everything:

Instead, preschool seemed to improve performance on a variety of “non-cognitive” abilities, such as self-control, persistence and grit. While society has long obsessed over raw smarts — just look at our fixation on IQ scores — Heckman and Cunha argue that these non-cognitive traits are often more important. They note, for instance, 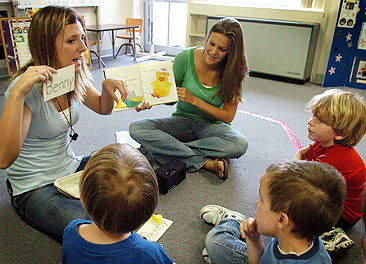 that dependability is the trait most valued by employers, while “perseverance, dependability and consistency are the most important predictors of grades in school.”

….Furthermore, the gains from preschool appear to be so significant and consistent that, according to Cunha and Heckman, investing in early childhood education is just about the most cost-effective way to spend public money. The economists calculate that, for every dollar invested in preschool for at-risk children, society at large reaps somewhere between eight and nine dollars in return. That’s how I want my tax-dollars spent.

Me too. I’ve always been impressed by the results of research showing the value of self-restraint. Kids who do well on a test of delayed gratification (“You can have one cookie now, but if you wait five minutes you can have two cookies”) do well in later life too — and self-control appears to be just about as important as intelligence in predicting success. (Lehrer has the full story here.) What’s more, regardless of what effect early intervention programs have on schoolwork or life earnings, they might well be worth it solely for their effect on crime. As Mark Kleiman says in When Brute Force Fails:

The famous Perry Preschool Project appears to have largely failed in its attempt to raise the measured IQs of participants, but the effects on criminal behavior seem to have been profound….[And] in a well-evaluated experiment in upstate New York, nurse home visitation for expectant mothers whose demographic profiles put their children at high risk of poor outcomes reduced the arrests among children of those mothers by 69 percent compared to the matched control group. If that result is even close to correct, nurse home visitation focused on high-risk mothers is surely cost-effective as crime control — compared, for example, with prison building — even ignoring all its other benefits and cost savings.

More early childhood interventions, please. And lead abatement too. If you’re looking for projects that are likely to have really high ratios of benefits to costs, these are your babies.