The Obama administration’s program to address home foreclosures, HAMP, has been a pretty dismal failure. Only a small fraction of the money 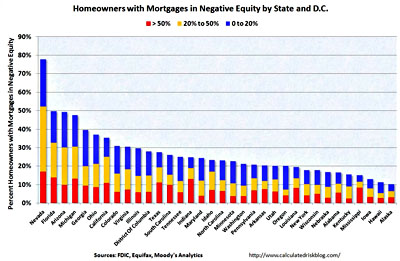 allocated to help homeowners has been spent and only a few hundred thousand loans have been modified. So what’s next? James Pethokoukis passes along the latest dirt:

Main Street may be about to get its own gigantic bailout. Rumors are running wild from Washington to Wall Street that the Obama administration is about to order government-controlled lenders Fannie Mae and Freddie Mac to forgive a portion of the mortgage debt of millions of Americans who owe more than what their homes are worth. An estimated 15 million U.S. mortgages — one in five — are underwater with negative equity of some $800 billion. Recall that on Christmas Eve 2009, the Treasury Department waived a $400 billion limit on financial assistance to Fannie and Freddie, pledging unlimited help. The actual vehicle for the bailout could be the Bush-era Home Affordable Refinance Program, or HARP, a sister program to Obama’s loan modification effort. HARP was just extended through June 30, 2011.

….Keep in mind the political and economic context. The nascent recovery is already running out of steam….The president’s approval ratings are continuing to erode, as are Democratic election polls. Democrats are in real danger of losing the House and almost losing the Senate. The mortgage Hail Mary would be a last-gasp effort to prevent this from happening and to save the Obama agenda. The political calculation is that the number of grateful Americans would be greater than those offended that they — and their children and their grandchildren — would be paying for someone else’s mortgage woes.

Maybe this happens, maybe it doesn’t. But it would sure be an improvement over spending the money on “foreclosure mills,” as Fannie and Freddie do now:

The business model is simple: to tear through cases as quickly as possible. (Stern’s company handled 70,382 foreclosures in 2009 alone.) This breakneck pace stems from how the mills get paid. Rather than billing hourly, they receive a predetermined flat fee for the foreclosure — typically around $1,000 — plus add-ons for each of the related services. The more they foreclose, the more they make. As a result, consumer attorneys and legal experts say, even families who have been foreclosed upon illegally—and who can afford to make good on their mortgages—end up getting steamrolled. “It’s ‘How fast can I turn this file?'” says Ira Rheingold, executive director of the National Association of Consumer Advocates in Washington, DC. “For these guys, the law is irrelevant, the process is irrelevant, the substance is irrelevant.”