One of the very few impressive things about conservatives over the last few years is that their opposition to President Obama, though frequently unhinged, misinformed, hypocritical, or outright dishonest, has generally lacked much in the way of racial animus. Obviously you can find some exceptions — Rush Limbaugh is a notable one, casting health care as “reparations” and trying to make his listeners fear that “in Obama’s America,” black kids can beat up white kids with impunity. 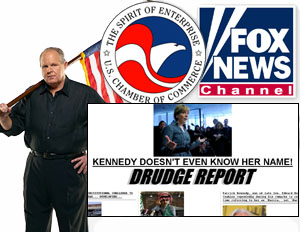 Limbaugh has largely been an exception against the general trend of de-racialized nuttiness on the right.

What you’re starting to see from Fox News now, though, is the most widespread and mainstream right-wing effort to exploit racial fears against Obama.

Hmmm. Is this really all that new? Yes, there’s Rush Limbaugh. And the whole Jeremiah Wright flap during the campaign. And Glenn Beck saying on national TV that Obama has a deep-seated hatred of white people. And the obviously racially tinged birther nonsense. And the famous Drudge headline about Obama “playing the race card.” And the endless obsession over Sonia Sotomayor’s “wise Latina” comment. And now Megyn Kelly’s fixation on the trivial and laughable New Black Panther Party — except, as Dave Weigel points out, Fox has actually been beating the NBPP drum for quite a while:

The difference between the Panthers and other freakish groups that look good on the air, of course, is that that they threaten white people.

….How often does Fox bring on the Panthers, or talk about them? A Lexis-Nexis search finds 68 mentions of “Malik Zulu Shabazz,” a leader of the NBPP. The majority are appearances on Fox News, where Shabazz is repeatedly brought on to act as a foolish, anti-Semitic punching bag. Among the segment titles: “Professor’s Comments on Whites Stir Controversy” and “Black Panthers Take a Stand on Duke Rape Case.”….This isn’t journalism. No one cares what the NBPP thinks about anything. This is minstrelsy, with a fringe moron set up like a bowling pin for Hannity to knock down. And that’s the role the NBPP plays on Fox, frequently.

But they might be playing a dangerous game here. As Chait says, the Fox/Megyn Kelly crusade against the NBPP is taking this to a whole new level, one that’s far more overt and far more incendiary than in the past. And there’s no telling how that’s going to turn out. As a friend puts it, “I think the reason why conservatives have so assiduously censored themselves from playing fast and loose with Atwater-esque racial overtones is that it can be a very difficult genie to put back in the bottle once released on a national stage.” The press will start paying attention, tea partiers might feel freer to spout off, and the whole thing could turn ugly very quickly.

Or not. Who knows? But for reasons of both principle and self-interest, some of the conservative movement’s big guns might want to think about weighing in on this before it gets out of hand. It can’t hurt.