Democrats steamrolled the most ambitiously liberal agenda in at least a generation. Yet liberals are miserable. Their lamentations over what 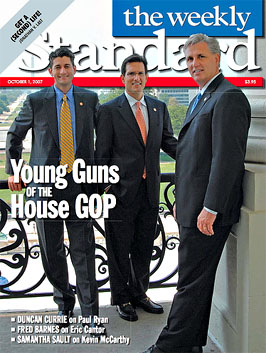 they see as President Obama’s lack of audacity punctuate the din, like ululating matrons at an Arab politician’s funeral. This misplaced griping stems not from Obama’s failure to “think big” but from a misreading of the political climate: Liberals thought they’d be popular.

Fair enough. A little florid for my taste, but then, I’m not a conservative. But it turns out that Goldberg has issues with his side too:

For a year or so, Republicans have been the so-called party of no. Contrary to the expectations of its critics, that tactic has been good for the GOP. It seems that the “tea parties,” America’s natural antibodies to Obamaism, have provided some vital stem cell therapy, helping to regrow the Republican spine.

But that spine is only valuable if you use it for something….Now is the time for the GOP to call Obama’s bluff and offer a real choice. My personal preference would be for the leadership to embrace Wisconsin Rep. Paul Ryan’s “road map,” a sweeping, bold and humane assault on the welfare state and our debt crisis. Doing so might come at the cost of trimming the GOP’s victory margins in November, but it would provide Republicans with a real mandate to be something more than “not-Obama.”

I swear, I would pay cash money if the Republican leadership would promise to actually do this. Goldberg thinks that liberals aren’t popular? That’s peanuts. If Republicans made a serious run at passing Ryan’s road map the party would end up just slightly more popular than the Taliban. I think there would literally not be a single demographic or interest group in the entire country still supporting them. Even the tea partiers would start pretending to be Democrats. Hell, they’d probably take up the cause of repealing the 22nd amendment and allowing Obama to be elected president for life.

Of course, it’s fine for columnists and pundits to say this kind of stuff. Just trying to move the needle, after all. But I sure wish party leaders would take them up on it once in a while. Democrats, for all their faults, generally do approximately what they say they’re going to do and then either pay the price or reap the benefits. Republicans don’t. They parachute into Tea Party gatherings and spout stemwinders about taking an axe to government spending, but when they get back to Washington they do just the opposite — all while figuring out ever newer and more inventive ways of providing tax breaks to favored industries. If they ever actually got serious about slashing all that government spending they claim they’re so dedicated to slashing, the party of Lincoln would end up on the ash heap of history.