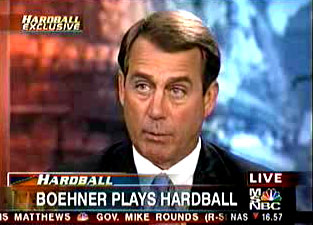 I really enjoyed Dan Balz’s piece on John Boehner in the Washington Post last night. Balz wanted to know what Boehner would do if Republicans won the House in November and Boehner became Speaker. Aside from a ritual call for repeal of healthcare reform, it turns out Boehner was none too eager to say:

First, he said, was a renewed commitment to fiscal discipline — a test his party badly flunked the last time it was in the majority. Second, he said, was to engage in “an adult conversation with the American people” about the need to rein in entitlement spending. And third, he wants to increase bipartisan cooperation in the House.

….Beyond saying Republicans would scrub the budget for wasteful spending, a pledge regularly made and ignored by politicians of both parties, he offered no examples of what programs Republicans would actually cut. Nor did he seem eager to tip his hand on the terms of entitlement reform. In his interview with the Tribune-Review, Boehner volunteered that the Social Security retirement age might need to be raised to 70 for younger workers but he would go no further.

Asked whether partial privatization of Social Security, which Republicans pushed unsuccessfully in 2005, would be part of a GOP agenda, he twice replied, “I have no idea.” Later, he called back to clarify, saying that what he meant to say was that, until Republicans complete their process of soliciting ideas from the American people, there will be no answer to that question. “We’re not going to prejudge what’s going to come out of this listening project.”

That hardly sounded like a politician eager to provoke an adult conversion with the American people.

Italics mine. You’d think that, by now, the GOP might have a decent idea of what it wants to accomplish without soliciting further ideas from the American people, but apparently not. They’re still trying to figure it out.

In any case, to summarize, Boehner wants to restore fiscal discipline — even though he’s never done it before and has no idea how to do it this time around. He wants to have an “adult” conversation with the American people about entitlements — even though the GOP has never done this before and he refuses to give even a hint about what this difficult conversation might entail. And most hilariously, Boehner insists that what he really wants to do if he becomes Speaker is restore a sense of civility and bipartisanship on Capitol Hill — even though he’s been the GOP’s point man for crude obstructionism from the day Barack Obama was sworn in. “Skeptics will doubt Boehner’s sincerity or capability,” Balz said dryly, and indeed they might. But points for chutzpah.