Time magazine has decided to take a lot of its print content off the web and make it available solely to print and iPad subscribers. Felix Salmon asks a good question:

My guess is that the answer is no, and that this is just a case of Time making a tactical decision which makes no strategic sense. It wants to sell lots of copies of its iPad edition at $5 a pop, but [if iPad content can 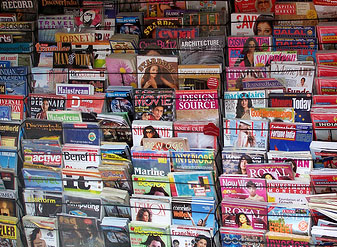 be read] for free just by firing up the web browser, it fears that sensible consumers won’t bother. So rather than improve the iPad app and make it worth the money, Time is artificially crippling its website.

As a magazine blogger it’s probably counterproductive for me to ask this, but my question is the opposite of Felix’s: why do news magazines bother putting all their content on the web in the first place? The answer, of course, is advertising revenue, but that’s pretty much turned out to be a bad joke, hasn’t it? Reliable figures are hard to come by, but IAB estimates online display advertising amounted to $8 billion last year, and I’d be surprised if more than a quarter of that came from magazine sites. So let’s be generous and say that magazines generated $2 billion in online advertising, or roughly 10% of the $20 billion they generate in print advertising. Assuming that news magazines work on about the same ratio, is that even worth keeping their websites alive for if it eats even moderately into print revenue?

I know, I know: it’s not as if print advertising is going gangbusters either. And if print is dying, then news magazines had better have nifty websites or else they’ll be out of business entirely. But I have my doubts about that logic. If it’s online or nothing, I doubt that a news magazine like Time can afford to operate at all. Protecting print and subscription revenue at all costs may not work, but it doesn’t strike me as an obviously stupid strategy. And the usual magazine strategy of putting content online several days or weeks after the print magazine has hit the stands obviously won’t work in the news world.

I’m not being antediluvian here. I’ve spent the last eight years of my life writing online, after all. But after well over a decade to sort things out, online journalism still doesn’t seem to have found a business model that makes sense. There are exceptions here and there (Politico, Gizmodo), but those do more to highlight the massive number of mainstream failures than to prove that there really is a replicable online model for others to follow.

But maybe I’m way off base here. Are magazines generating — or on track to generate — more online revenue than I think? Are there hybrid models out there that I’m unaware of? Or is the future of online versions of existing print journalism as bleak as it looks? Comments?