Megan McArdle responds today to the idea of balancing Social Security’s books in one fell swoop by removing the cap on earnings that are hit by the payroll tax. This cap changes with inflation each year and it’s currently set at a little over $100,000. If we removed the cap and taxed all income, Social Security’s financing would be in great shape:

This is not actually surprising, since what this amounts to is hiking the marginal tax rates on high incomes by 15 percentage points–making the Federal Tax take on the highest incomes 55% in 2012, assuming that Obama/Congress follows through and allows the Bush tax cuts to expire in 2011.

This is obviously a gigantic hike, and moreover, when Medicare and state/local taxes are added in, would push the tax burden on the highest incomes to over 2/3 in the hightest tax jurisdictions.

Whatever you think of this plan, this is not an easy solution. It would be fought bitterly in Congress; it would cause high earners to put enormous effort into generating income in forms (capital gains) that are not subject to payroll tax; and at that level, you would start seeing serious avoidance activity, as well as possibly simply diminished effort.

This is basically right — though I think the marginal increase would be 12.4%, not 15%. But that’s still a helluva lot. If we’re ever going to raise marginal rates on the rich by that amount, I’d want to use it for more than just balancing Social Security’s books.

Really, though, you don’t need to go down this road. Contra Megan’s headline (“No Easy Way To Fix Social Security”), Social Security is a pretty easy problem to address, and the reason it’s easy is that you don’t have to limit yourself to a single big solution. In fact, Social Security reform practically cries out for a basket of small, almost imperceptible changes. You could, for example, partially uncap the payroll tax or change the tax rate slightly (or a combination of the two); gradually increase the retirement age to 68; and adjust the inflation calculation for annual benefits slightly. This would fix Social Security’s problems entirely and would be barely noticeable for most people. 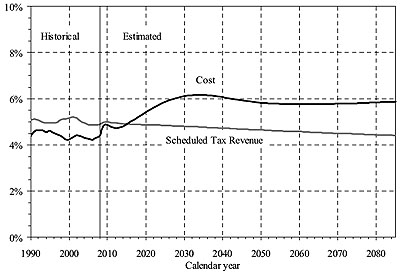 There are several nice things about Social Security. First, it’s a long-term problem. The trust fund doesn’t go out of balance for several decades, so we have plenty of time to phase in changes slowly. Second, its demographics are well known and flatten out after about 2035. Unlike Medicare, which will need constant vigilance over the next few decades, a proper Social Security fix probably only has to be done once. And third, Social Security’s funding problem is modest (less than 2% of GDP) and can be solved without very much pain.

Of course, even given all that, we still haven’t solved it. Needless to say, this doesn’t bode well for our ability to fix genuinely hard problems like climate change and healthcare costs.