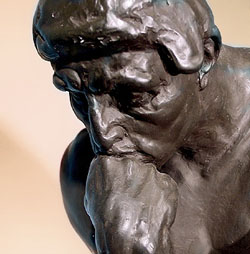 I promise not to blather forever on the death and atheism meme, but I think I’ll do one more post on the subject just to finish things up. I wrote a few days ago that although knowledge of our inevitable death is unique to humans, it doesn’t define what it means to be human any more than a hundred other things that are unique to humans. Andrew Sullivan disagrees:

I find Kevin’s final statement unpersuasive. To be human is to be aware of our own finitude, and to wonder at that. Montaigne argued that to philosophize is to learn how to die. Camus put it differently: men die and they are not happy. For me, this last thing is our first thing as humans. It is our defining characteristic, even though some animals may experience this in a different way.

And our ability to think about this casts us between angels and beasts. It is our reality. Facing it is our life’s task.

I think I hardly have to say that this subject is light years outside my usual wheelhouse. So I don’t have a lot to say about it. But this attitude toward death surely sums up a vast chasm between the religious and the nonreligious. “Facing it is our life’s task”? I can’t even conceive of that. I think about death sometimes, just like everyone, and sometimes these thoughts bother me more than other times. But thinking about it all the time? Casting it as uniquely central to the human condition? That’s almost incomprehensible to me. Wondering about our own finitude is one thing — I imagine we all do that from time to time — but why should this be elevated above the human ability to create art, science, mathematics, love, war, poetry, trade, government, or ethics — or the ability to wonder in the first place? Why is learning how to deal with our eventual death the defining characteristic of being human? Not just because Montaigne said so, certainly.

There’s no answer, of course. Andrew thinks it is and I don’t. But I confess that even on an intellectual basis I have a hard time grasping this. Still, we can’t just let things rest there, can we? So instead, in an audacious effort to wrest this question away from the high-minded philosophers and transform it back into the kind of research and policy drudgery this blog excels at, here’s an odd and seemingly unrelated thought: are autistics less religious than the rest of us? In general, as you go further along the Asperger’s/autism spectrum are you less likely to believe in God and be concerned about death? And vice versa for those at the other end of the spectrum? I’m not sure why this conversation caused this particular question to pop into my head, but it did. Does anyone know if there’s any research on this subject?