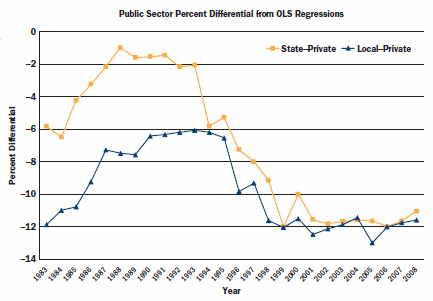 A friend sent me a link to a new study that follows up on a question I asked a few weeks ago: are public sector employees paid more than comparable private sector employees? According to Keith Bender and John Heywood, who did a study for the Center for State and Local Government Excellence, the answer is no. In the chart on the right, the zero line (at the top) indicates parity. Anything below that indicates lower pay than the private sector. As you can see, pay for state employees crept up to near parity with the private sector in the late 80s, but ever since the late 90s the differential has been about -12%. If you add in the richer benefits that public sector employees get, the pay differential is about -7%.

I’m offering this as a data point only. There are loads of caveats. For starters, the authors use broad averages from the Current Population Survey and then adjust for things like education, age, gender, and so forth. However, this quite likely masks a considerable skew in the data. The very top jobs in the public sector — lawyers, doctors, executives — are paid quite a bit less than in the private sector. So if the average pay difference is -7%, it’s quite possible that the majority of mid-range workers are paid more than their private sector counterparts. It would be interesting to see them do a similar comparison that excludes, say, the top 10-20% of earners.

It’s also possible that this research underestimates the future value of public sector pensions, which appear to be badly underfunded right now. Data for current years may not capture this. And overall averages might not capture differences in specific job categories.

What’s more, I don’t know anything about Center for State and Local Government Excellence, so I don’t know what kind of axe they may or may not have to grind.

Still, even with all those caveats, aggregate data is still worthwhile. What we’re mainly interested in, after all, is the total payroll expense of state and local governments compared to a demographically similar private sector organization, and this data suggests that the difference is small but negative. The report also contains data for individual states, which shows, for example, that California workers are paid just slightly less than their private sector equivalents while Texas pays their workers nearly 15% less. Overall, I don’t think this report settles the public-private question for all time or anything, but it’s interesting data.