Via Twitter, National Review editor Rich Lowry suggests that conservatives are a lot more interested in financial reform than I (or Jonathan Chait) give them credit for. To demonstrate, he points to a post that has links to nine pieces recently run on the NR website or in the magazine.

I’ll get to those in a minute. First, though, I should clarify: I wasn’t targeting any particular magazine when I suggested that conservatives haven’t shown a lot of serious interest in financial reform. My observation was much broader than that. When I think of the blogs that have become go-to sites on the financial crisis — Mike Konczal, Felix Salmon, Barry Ritholtz, Simon Johnson & James Kwak, Yves Smith, Steve Randy Waldman, and others — they’re mostly run by folks with a leftish tilt of one kind or another. Ditto for books. Ditto for magazine pieces. 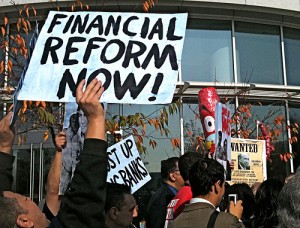 There are a few conservatives who blog and write about financial regulation too, but just not very many, and almost none that do it with the depth and passion — or the kind of concrete proposals — of the lefties. That’s why lefty sites mostly end up arguing with other lefties.

But what about National Review in particular? Well, aside from nonsense about the CRA there’s one thing for sure that we know conservatives are exercised about: the supposed “bailout fund” contained in Chris Dodd’s reform bill. So I’ll give ’em that. And sure enough, of the nine piece linked in this post, five of them (1, 2, 3, 4, and 8) are primarily about that. Of the others, #6 and #7 are just reporting and nonspecific commentary, and #9 is some kind of weird analogy with oily rags and fire insurance that I couldn’t even make sense of. Bottom line: NR has some commentary on reform, but there’s not much, and what there is is almost entirely dedicated to griping about resolution authority and the “bailout fund.” It’s essentially pretty trivial stuff. On a broader note, The Corner probably puts up a couple hundred posts a week on every topic under the sun, but most weeks you can count the number dedicated to serious commentary on financial reform on the fingers of one hand.

But maybe you noticed that I skipped a step up there. What about item #5? It’s by Duncan Currie, and after a bit of throat clearing about the bailout fund and the dreaded CFPA, he offers three reform suggestions Republicans should take up. Here’s the condensed version:

(1) A one-page mortgage form….The form would clearly and concisely show prospective borrowers how their mortgage payments relate to their income, and would be accompanied by a two-page glossary defining various technical terms. It has received praise from none other than Elizabeth Warren, chair of the TARP Congressional Oversight Panel.

(3) Implementing new capital requirements….In the latest issue of National Affairs, economists Oliver Hart of Harvard and Luigi Zingales of the University of Chicago describe an innovative approach. Briefly, Hart and Zingales would force big financial firms to safeguard their systemically important obligations by carrying two layers of capital, the second of which “would allow for a market-based trigger to signal that a firm’s equity cushion is thinning, that its long-term debt is potentially in danger, and therefore that the financial institution is taking on too much risk.”

This is the kind of thing I’m talking about. It’s obviously not what I’d propose, and it doesn’t really address the deepest regulatory issues that probably cause the most heartburn for conservative ideology. Still, it shows a serious interest in the subject and tosses out some real proposals. Mortgage loans should be simpler. Fannie and Freddie do need to be dealt with. And capital requirements are a key part of any reform effort. It’s a good piece.

But it’s just one piece. Beyond that, I guess my question is, Where are the Mike Konczals and Simon Johnsons of the right? That is, conservatives who acknowledge the serious market failures that brought on the crash (instead of obsessing solely over CRA or Fannie Mae) and who go beyond just sniping at Democratic proposals. Conservatives who write regularly for a lay audience and really take seriously an obligation to explain what they think happened and what we ought to do to fix it. Maybe they’re out there and I’m just not reading them. But if someone gives me half a dozen names, I’ll take a look.