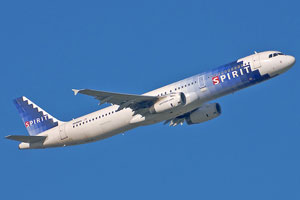 Matt Yglesias tries to convince me that charging $45 to stow a carry-on bag on my next flight isn’t such a bad thing:

Everyone outraged by Spirit Airlines’ decision to start trying to charge an extra fee for people who want to use the overhead bins — including Chuck Schumer who seems to be aiming for a quasi-regulatory solution or else a way to get on camera — should consider Paul Krugman’s argument that price-discrimination in monopolist-dominated markets is socially optimal.

Technically, I don’t really disagree. Ever since deregulation, airlines have been the poster children for rampant price discrimination. Everybody says they hate it, but the fact that airlines have practically been driven out of business by their inability to make money suggests that consumers have done pretty well by it. What’s more, Spirit’s bag fee has all sorts of excellent arguments in its favor. It gives you an incentive to pack light. It gives you an incentive not to slow everyone down loading and unloading the overhead bins. It lets people fly extra cheap if they’re willing to fly with no baggage — as my grandmother used to do. (Don’t ask.)

And yet….there’s a social aspect to this that gnaws at me a little bit. A while back there was a minor blog thread that made the rounds over the issue of free bread at restaurants. Economically, this is inefficient. People eat more bread than they really want because it’s “free.” People who don’t want bread subsidize everyone else. Etc.

All true. But one of the primary causes of personal stress is decisionmaking, and modern life jacks that up every time we’re forced to make yet another goddam decision. Do we really want to have to decide if we want the bread or do we just want to enjoy dinner? Do we want a dozen different options on our flight, or would we rather just buy a ticket that includes all the usual stuff? Should credit card apps have 30 pages of legalese attached to them or would a few simple rules about interest rates and annual fees be enough?

Choice is good. Most of the time we want it, and economically it’s often beneficial. But it can also hide things and make prices hard to compare.  Is the Spirit flight really cheaper? Better do a close comparison! Is dinner at Joe’s the same price as dinner at Mary’s? If Joe charges for bread, maybe not. And that cheap credit card might not be as cheap as you think if your rate suddenly gets jacked up because you paid your water bill late and didn’t realize that made a difference. Not having to worry about that stuff might be worth a few dollars.

Anyway, just a thought. Cheap flights are good, but sometimes there’s such a thing as a market that’s too efficient. We might all find ourselves a little bit happier and a little bit less frazzled if prices were a few dollars higher and, in return, there were a few less decisions forced on us every day.