Speaking of conservatives and financial reform, Arnold Kling is one who does write seriously about the subject on a fairly regular basis. A couple of days ago he listed three problems with Chris Dodd’s financial reform bill, all of which seem reasonable to me (though I think Dodd is 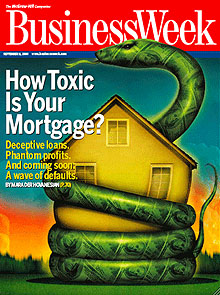 planning to take up reform of Fannie Mae and Freddie Mac in a separate bill). But then he took this shot at the proposed Consumer Financial Protection Agency:

I know that it’s axiomatic that poor people are helpless victims. But in the case of these mortgages [i.e., bubble-era ARM/no-doc/exotic mortgages], that is a really hard sell. The banks did not take from poor people. They gave to poor people….I’m sorry, but if you borrowed up to 100 percent of the value of the house or more, then all you really lost were your moving expenses.

What about predatory lending? As I understand it, the idea of predatory lending is to saddle the borrower with an expensive mortgage so that you can foreclose on the property and sell it at a profit. How many times did that happen? Have you read of a single instance in the past three years where the bank made a profit on a foreclosure?

Put aside the question of whether or not poor people really have suffered thanks to exotic mortgages, a problem that I think Kling dismisses much too easily. From a systemic point of view, the real issue is that predatory lending on a large scale helped to massively inflate the housing/credit bubble of the aughts. If the home loan market had been regulated stringently enough to keep mortgage lending relatively sober, the bubble most likely would have been half the size it ended up at, the credit derivative tidal wave never would have picked up a lot of steam, the bursting of the bubble would have kicked off a normal-sized recession instead of a near-depression, and the banking system would have survived without massive government intervention.

Of course, the proposed CFPA would do a lot more than just regulate mortgage lending, and we can argue about whether that regulation would be a good thing. But the Fed obviously did a lousy job of reining in mortgage brokers during the past decade, and since property is by far our biggest (and most dangerous) asset class, doing a better job of that is a key part of preventing a repeat of 2008. Giving that responsibility to someone who takes it more seriously seems like a pretty good idea to me.