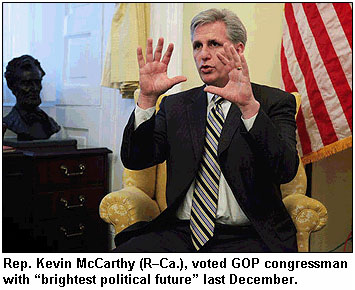 Jon Chait points us to Politico’s reporting of the great dilemma Republicans find themselves in this year:

House Minority Whip Eric Cantor wants a document, akin to Newt Gingrich’s 1994 Contract With America, that identifies specific pieces of legislation Republicans could pass if they win back the House. He thinks Republicans should “put up or shut up,” an aide close to the process said. So does Indiana Rep. Mike Pence, the House Republican Conference chairman. The party doesn’t need “sloganeering,” someone familiar with his thinking said.

….But Rep. Kevin McCarthy, the California Republican who is leading the effort to craft the document, says that including specific legislation in the contract would smack of the backroom deals the GOP accuses Democrats of making, so “you won’t see it written out.”

A backroom deal! You can’t really call this Orwellian because at least Orwellianism makes a certain kind of sense. This is the kind of thing you blurt out when you can’t think of anything to say but you know you have to say something.

Likewise, Steve Benen finds Sen. Scott Brown (R–Mass.) explaining that he can’t support financial reform because it’s “going to be an extra layer of regulation.” Which is like saying that you don’t want better brakes on your car because “they’re going to slow me down.” And when the reporter followed up to ask what he wanted fixed in the current bill, he just got completely flummoxed: “Well, what areas do you think should be fixed?” he said. “I mean, you know, tell me. And then I’ll get a team and go fix it.”

Republicans must be praying that they can keep this up for the next six months. They’ve got a pretty good shot at it, I suppose, since people are unhappy enough about the economy that they don’t really care much what the GOP is actually saying. Still, it’s a risk. “Time for a change” may be one of the two all-time classic campaign slogans, but usually you need to give people at least a rough idea of what kind of change you’re campaigning on. But Republicans are afraid that even a rough idea is going to expose the fundamental incoherence of their positions. It’s quite a tightrope they’re walking.