Is Copenhagen working? Not the city — which is working just fine, I assume — but the Copenhagen Accord reached last December. At the time, it seemed like a bust: the initial hope had been to get a legally binding global agreement to seriously cut greenhouse gases, but as time went by hopes diminished until, finally, in a chaotic last minute scramble that featured various world leaders wandering from room to room while the Danish hosts desperately tried to get something in writing in the face of opposition from just about every corner, the exhausted conference made only a “decision to note” a short document that was mostly a blank numbered list. Those blanks were intended to be filled in later with pledges for GHG reductions.

At the time, all those blanks seemed emblematic of a historic failure. But now that the dust has settled and some of them have been filled in, how are we doing? There have been a flurry of reports recently about this, but no firm conclusion. First up is Kevin Parker of Deutsche Bank, who released a report last week saying that the Copenhagen conference, far from being a failure, had produced “the highest number of new government initiatives ever recorded […] in a four-month period.”

Fine. But how does that translate into GHG reductions? Trevor Houser of the Peterson Institute takes a crack at an answer. After adding up the various pledges made so far, and then assuming some additional mitigation from “international finance,” he figures that 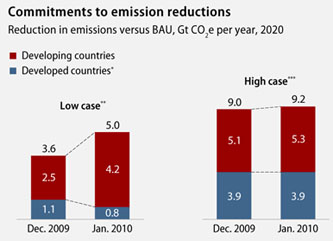 Copenhagen has produced pledges totalling something between 4.17 and 7.29 gigatons of CO2e by 2020. That’s a reduction of 7-13% compared to business-as-usual (BAU).

Fine again. But how much of that represents new pledges? Andrew Light and Sean Pool of CAP provide the guesstimate shown on the right. Prior to Copenhagen they figure the world had already agreed to reductions in the range of 3.6-9.0 gigatons. After Copenhagen that went up to 5.0-9.2 gigatons. If you optimistically assume that the real number will be halfway between the low and high estimates, it means that pledged reductions went from 6.3 gigatons to 7.1 gigatons. That’s 0.8 gigatons better, or about 1.5% of total estimated GHG emissions in 2020.

Obviously this gets us closer to our goal of preventing a catastrophic rise in temperature over the next several decades. But not a lot closer. And even these numbers have to be taken with a grain of salt. The United States, in particular, is a wild card, since our “pledge” is meaningless unless Congress adopts it and then passes legislation designed to enforce it. Pledges from developing countries should be taken with a grain of salt too: they aren’t for hard reductions from a base year, but either for reductions in the amount of GHG emitted “per unit of economic growth” or for reductions “below BAU.” This is necessarily pretty fuzzy. What’s more, the reductions attributed to “international finance” are sort of dodgy, and the assumption that countries will actually beat their low-end estimates is pretty optimistic.

In other words, Copenhagen still doesn’t look very successful to me. Light and Pool give this the best spin possible:

One good outcome of Copenhagen is that the accord is still a work in progress. Our calculations of what can be achieved by current pledges under the accord are not final. They can still be improved. It doesn’t make sense to worry that the commitments made so far put us on a disastrous pathway to a world 3, 4, or more degrees warmer. That would only be a legitimate worry if the Copenhagen Accord had been finalized last December as a legally binding document at the current level of commitments. Instead, we still have time to use the accord to get us to a safer world.

I don’t think it would have occurred to me to think of it this way. But I sure hope they’re right.