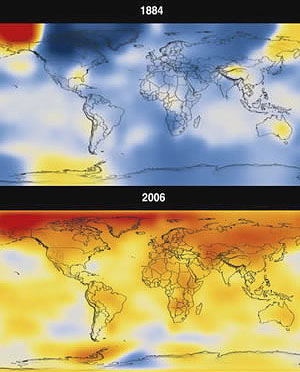 Stuart Staniford, after reading Paul Krugman’s NYT Magazine piece about climate economics, is skeptical that we can reduce carbon emissions 83% by 2050. After all, the economy is going to grow a lot during the next forty years:

If the economy is going to be a bit more than three times larger, but we are only going to emit 17% of the current level of carbon emissions, then the carbon intensity of the economy — that is the ratio of carbon emitted per dollar of goods and services created, is going to have to be only 5% of the current value. Next you have to figure that there are certain things in an industrial society that are very hard to do without liquid fuel — construction and agricultural machinery come to mind, along with aviation. Relying heavily on biofuels is a very dubious prospect in a world that also needs to feed 9 billion (assumed wealthier) people from its limited agricultural land. So you can probably figure that the residual 5% of carbon emission intensity is all going to go on these kind of specialized uses that are hard to substitute.

Therefore, these goals basically imply that the ordinary living and working of most citizens would be essentially carbon free by 2050. That is in 40 years time.

….Now, the lifetime of cars is much less than 40 years, so they will all be replaced anyway; that’s not a problem (though there are certainly are questions about the ultimate scalability of that many electric cars). But the median age of a house is 35 years […] and of course other kinds of infrastructure tends to last even longer than houses.

….Now, think of it this way: suppose you have a certain amount of money to spend over the next forty years that is your share of industrial society’s surplus. You could take that money and either a) tear down your house and replace it with a super-insulated carbon-neutral one of about the same size, or b) add an extra floor and a swimming pool to the house you have and continue to power it with cheap fossil fuels (coal and shale gas, let’s say). I would argue that this is, very roughly, what the choice between business as usual and an 80% reduction in carbon emissions means in personal terms.

This strikes me as both right and wrong. Are we likely to meet our goal of cutting carbon emissions 83%? Probably not. I imagine Stuart is right about that. But is that cause for despair? Hardly. If we aim for 83%, maybe we’ll get to 60% instead. And perhaps that will turn out to be enough. Or, if it isn’t, perhaps some modest geoengineering will get us the rest of the way. And if that’s not enough and geoengineering isn’t acceptable even on a modest scale — well, at least we’ve only got 23% to go. Any way you look at it, we’re better off than if we shoot for a more “reasonable” goal of 60% and only make it to 40%.

Beyond that, of course, we don’t necessarily have to live in super-insulated passive solar houses or work in super insulated zero-emissions offices and factories. Ordinary efficiency gains can get us a long way toward lower — if not zero — emissions, and what energy needs remain might be provided by solar, geothermal, or other sources. It’s not an all-or-nothing proposition.

I think it’s too easy to be overwhelmed by the scope of the climate change problem. It’s unquestionably fantastically difficult, and any sober look at human nature, developing country growth, and capital stock inertia suggests that we’re going to have a very hard time meeting our most ambitious goals. But there really are pretty feasible ways of getting a lot of the way there, and if carbon pricing and other programs motivate the next Thomas Edison to invent something remarkable a year or a decade before it might have otherwise happened, who knows? That might get us the rest of the way.

And if it doesn’t? Well, look: three degrees of temperature increase is still better then five degrees. Six inches of sea rise is better than 12 inches. A hundred million dead is better than a billion dead. This stuff is worth doing even if it’s not perfect. After all, what is?