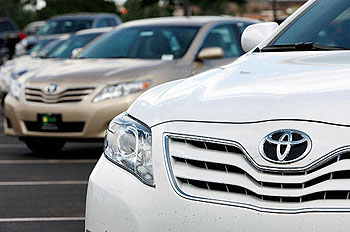 Here’s the latest on the Toyota “sudden acceleration” problem:

Momentum is building for a rule requiring automakers to install brake override systems so drivers can stop their cars during incidents of sudden acceleration, which has been blamed in the deaths of more than 50 people in accidents involving Toyota vehicles nationwide.

At a Senate Commerce Committee hearing on Toyota’s sudden-acceleration problem Tuesday, Sen. John D. Rockefeller IV (D-W.Va.) said “strong legislative action,” including mandates for brake overrides, is needed to protect motorists….The Department of Transportation is also considering a rule to mandate an override system. “We think it is a good safety device, and we’re trying to figure out if we should be recommending that,” Transportation Secretary Ray LaHood told members of the committee.

I’d like to see this happen if it’s technically feasible. Here’s why: Toyota obviously didn’t take the reports it received of sudden acceleration problems seriously enough. My sense, though, it that there was probably a reason for that: drivers have been complaining about sudden acceleration in a wide variety of cars for decades, and their complaints almost always turn out to be bogus.1 Most of the time, what happened was that they panicked and actually had their foot on the throttle, not the brake. They’re absolutely sure their foot was on the brake, but it wasn’t.

This history doesn’t defend Toyota’s slow response, but it does make it understandable. They probably figured it was just more of the same. That’s why the brake override would be a good idea. It’s human nature to downplay a problem that you think you already know the answer to, and a brake override would eliminate that. If you got a report of sudden acceleration, you’d have to take it seriously. The old saw about the driver panicking wouldn’t hold water. You’d know immediately that there had to be some other problem.

Plus, of course, it would also save lives when people do panic and jam their foot on the accelerator.2 Like everyone, I’ll wait for the technical assessment of this, but it sure sounds like a good idea to me. How expensive can a simple mechanical linkage be, after all?

1If I’m off base about this, let me know in comments.

2Sorry, complete brain meltdown there. Obviously a brake override won’t have any effect if your foot is on the throttle. Thanks to Omega Centauri in comments.