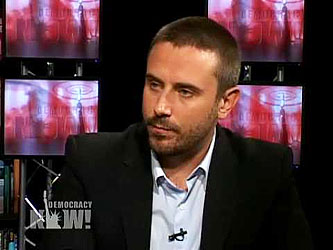 BD: Given the political divisiveness of issues like health care, there’s a lot of pressure for progressive publications to fall into what you have called a “blue state” mentality. What are the hazards of this?

But let’s be clear here: This is a complete and total sellout to the interests of the insurance lobby by the Obama administration. This is, as Michael Moore has said, a complete victory for the ultra-capitalists. Yet, if you look on the liberal blogosphere, people like Jane Hamsher are attacked mercilessly for having the audacity to stand up and say “this is a Democratic sellout.”

So you have this blind allegiance to … what? To Obama as a man? To the Democrats as a party? To me, it’s very dangerous when you start going down the road of unquestioning support for any powerful individual or any politician. The moment you cede your conscience to a politician is the moment you stop struggling for a better society.

I’ve got nothing but props for Scahill’s work, but this is just wrong. There are, obviously, plenty of partisan hacks on both sides of the aisle, but most of us who supported the current healthcare bill — warts and all — did so because it was, plainly, not only an enormous first step1 forward, but the only way to make that first step. A government-run single-payer solution was never even remotely politically plausible, and anyone who insisted on jettisoning our current framework of private insurers as a condition of reforming healthcare would never get any serious reform passed. End of story.

As for the private insurance industry, I’ll make a prediction: within 20 years it will be gone in all but name. Either the federal government will fund the vast majority of health insurance, or else private insurers will essentially be regulated utilities, as they are in Germany or the Netherlands. This bill is the beginning of the end for all of them, and this week’s reform bill is what set that train in motion.

1OK, technically it was the second step. Medicare was the first. But you know what I mean.