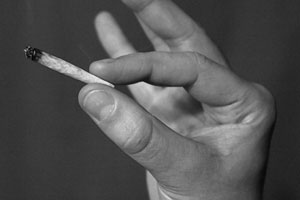 Last year I wrote a piece for Mother Jones about marijuana legalization. There were lots of obstacles in the way of legalization at the time, so my conclusion was cautious: “Ten years from now, as the flower power generation enters its seventies, you might finally be able to smoke a fully legal, taxed, and regulated joint.”

Well, it’s been more like ten months since I wrote that, not ten years, but this week an initiative qualified for the November ballot that would legalize, regulate, and tax marijuana use in the state of California. This follows a year of growing acrimony in Los Angeles County over the flourishing of medical pot dispensaries and efforts by local officials to rein them in.

The initiative, sponsored by Richard Lee, who owns several marijuana businesses in Oakland, would legalize possession of up to an ounce of cannabis and cultivation of up to 25 square feet on private property for personal consumption. Beyond that, it would permit local authorities to go further: They’d be allowed to legalize commercial cultivation of larger amounts for sale to anyone over the age of 21.

So, is this a good idea? The fear of moderate proponents of legalization has always been the possibility of large corporations, like Philip Morris, getting into the marijuana business and marketing pot to heavy users. “One person smoking eight joints a day is worth more to the industry than 50 people each smoking a joint a week,” says Mark Kleiman, a drug policy expert at UCLA. “If the cannabis industry were to expand greatly, it couldn’t do so by increasing the number of casual users. It would have to create and maintain more chronic zonkers.”

Lee’s initiative opens that door. Philip Morris wouldn’t be allowed to engage in interstate commerce of marijuana, but if, say, Humboldt County agreed to allow unlimited cultivation of cannabis, they could grow it in their own fields and sell it through licensed outlets in any other county in California that also permitted commercial sales.

So what would stop the multinational marketing juggernauts from doing exactly that? For starters, the federal government, which still classifies marijuana as a Schedule 1 drug—as it’s required to do by international treaty. That means it’s flatly prohibited, and even if the feds decided not to bother prosecuting small-time growers they’d almost certainly go after a Fortune 500 corporation that got into the business. Along with the PR damage of being part of the pot industry, this would almost certainly be enough to keep the Philip Morrises of the world at bay.

So what are the odds of Lee’s initiative passing? Recent polls suggest that 55 to 60 percent of Californians support legalization, a margin that’s almost certain to drop once the saturation advertising starts. So it’ll be a close call. And me? At the time I wrote my marijuana piece, I’d never smoked a joint. I still haven’t. But the chances are good that I’ll vote to allow everyone else to do it.