Matt Yglesias made a good and underappreciated point about the Democratic healthcare bill yesterday. There’s a core group of lefties that oppose it for idiosyncratic reasons, “But the point I want to emphasize is that theirs is a pretty marginal point of view. ‘The left,’ in 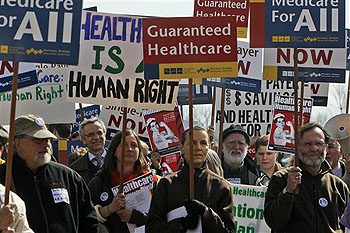 Americans United for Change is set to announce a $500,000 ad campaign in the districts of multiple House Dems across the country, a source familiar with the plans says. The labor federation AFSCME is preparing a “significant push in the weeks ahead,” according to an AFSCME official, who adds that ads could air before and after the House votes on the Senate bill, providing cover for Dems who find themselves under assault after voting Yes. Americans for Stable Quality Care, a pro-reform coalition which is working with the labor powerhouse SEIU, is finalizing plans for a major buy in multiple districts, an official familiar with the plans says.

So unions are spending heavily in support of the bill, MoveOn’s members support it 83%-17%, Nancy Pelosi is putting the screws on her caucus members, Harry Reid is doing the same in the Senate, and President Obama is finally pulling out all the stops too — both in front of the cameras and behind the scenes. Among the netroots, Markos Moulitsas says it’s time to stop screwing around and pass the bill, and virtually every liberal member of the wonkosphere favors it as well. Ditto for church groups and civil rights groups. That’s an enormous amount of firepower, and that’s why, despite all the last-minute posturing and kvetching and preening, I think this bill is going to pass. In the end, that’s just too much pressure to bear. Nancy Pelosi is going to get her 218 votes.

But it’ll be close! If you haven’t called your member of Congress, do it today. For a full list of congressional names and phone numbers, go to Congress.org. Type in your representative’s name and it will pop up an information page that includes a phone contact. Don’t know who your representative is? Enter your zip code and it will tell you.