On Sunday I watched 60 Minutes do a segment about Bloom Energy, a new fuel-cell startup from Silicon Valley that’s supposedly created a revolutionary new energy source. Unfortunately, I was left completely in the dark about how good the technology really is. 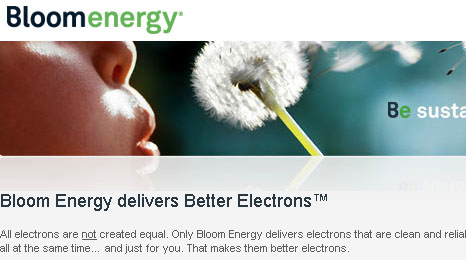 The BloomBox runs on various kinds of gas, but the primary fuel source for most customers will likely be natural gas, so the obvious question is: does it produce electricity more efficiently than a gas-fired power plant? Today, the New York Times sort of tells us:

Bloom executives said the energy server, which can be installed in a matter of hours, operates at an efficiency of 50 to 55 percent and can reduce greenhouse gas emissions 50 to 100 percent depending on the type of fuel used.

….Bloom executives said the company spent years developing a proprietary seal made from low-cost materials to prevent cracks and leaks. They estimate that the Bloom boxes will have a 10-year lifespan and that the company will have to swap out the fuel-cell stacks twice during that time. Mike Brown, an executive with UTC Power, a leading fuel-cell maker, said the fuel cells need to last at least four or five years for the technology to be competitive.

Hmmm. I’m still a little stumped. The average price of electricity to commercial customers in the U.S. is about 10 cents per Kwh, roughly the same as the BloomBox. But does the BloomBox price take into account replacing the fuel-cell stacks every three or four years? That’s not clear. But even if it does, this suggests that the BloomBox will be a decent — though hardly transformational — power source only in areas where electricity costs are higher than average, not for the mass market. As for greenhouse gas emissions, it’s hard to see an apples-to-apples benefit. If you compare a gas-fueled BloomBox to a gas-fired electric plant, greenhouse gas emissions ought to be the same, shouldn’t they? The fuel cells don’t do anything to the carbon content of the gas, after all. So is the environmental benefit simply the fact that a BloomBox can also run on greener fuel sources, and can do it more easily than most big generation facilities? I’m still a little confused here.

I suppose this will all get sorted out in time and we’ll learn what’s really going on. But even more mysterious is this:

The byproduct of fuel cells is water, and Bloom has patented and proved a fuel-cell design that could also tap electricity generated by solar panels and wind farms to electrolyze water to produce hydrogen that could be used as fuel in the cell. “That’s the killer app,” said Mr. Sridhar, who said such a product probably would introduced within a decade.

Hold on. They’re saying that we can use solar panels to create electricity, pump the electricity into a BloomBox to create hydrogen, use the hydrogen to power a fuel cell, and this is somehow more efficient than simply using the electricity directly generated by the solar panel? My thermodynamics professor would have been scandalized. Am I missing something here?