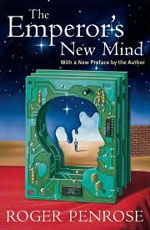 Several years ago physicist Roger Penrose wrote a book suggesting that human consciousness can’t be explained by standard chemical and physical processes. The only thing that could explain it, he said, was quantum processes, specifically microtubules that take advantage of quantum gravity effects.

I read Penrose’s book when it came out, and like most people I wasn’t convinced. For starters, the required quantum coherence effects just don’t seem possible at room temperature. But today Tyler Cowen points to a new paper in Nature showing that there are apparently quantum coherence effects at work in the way some algae produce energy via the eight pigment molecules used in photosynthesis:

The route the energy takes as it jumps across these large molecules is important because longer journeys could lead to losses. In classical physics, the energy can only work its way across the molecules randomly.

….The team first excited two of these molecules with a brief laser pulse, causing electrons in the pigment molecules to jump into a quantum superposition of excited states….The results are a surprise. Not only are the two pigment molecules at the centre of the antenna involved in the superposition; so are the other six pigment molecules. This “quantum coherence” binds them together for a fleeting 400 femtoseconds (4 × 10-13 seconds). But this is long enough for the energy from the absorbed photon to simultaneously “try out” all possible paths across the antenna. When the shared coherence ends, the energy settles on one path, allowing it to make the journey without loss.

The discovery overturns some long-held beliefs about quantum mechanics, which held that quantum coherence cannot occur at anything other than cryogenic temperatures because a hot environment would destroy the effect. However, the Chroomonas algae perform their work at 21 °C.

None of this means Penrose is correct, of course. But it does suggest that quantum effects are at least possible at the biological level, and therefore maybe in the human brain. Interesting stuff.