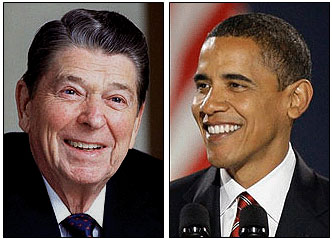 Both Ronald Reagan and Barack Obama finished their first year in office with the economy in trouble and their approval ratings in tatters. And yet, Obama’s troubles seem much worse than Reagan’s. Some of this, I think, is just hindsight bias: we all know that Reagan’s presidency turned out OK in the end, so it’s easy to view his problems as less severe than they were. But Bruce Bartlett argues, convincingly I think, that there’s more to it: Reagan had a compelling and consistent narrative of liberal failure that got him through the bad times and set him up to take credit for eventual recovery. Obama doesn’t:

I bring up this history because Obama inherited a great many problems from the George W. Bush administration similar to those Reagan inherited from Carter. But rather than draw a clear distinction between his policies and those of the past, as Reagan did, Obama has tended to continue those policies. And in those cases where his policies are sharply different, Obama has tended to downplay those differences.

Foreign policy is clearly the area where Obama had the most to gain by a break with the past. He could have easily argued that the whole Iran-Afghanistan conflict was ill-conceived, based on bad intelligence and a ridiculously Utopian idea that we could impose democracy by military force in countries that had no experience with it or any of the requisite institutions….On the economy, Obama has done a terrible job of explaining how much of the mess he is dealing with was caused by the Bush administration’s policies….Obama could also have explained how the Federal Reserve’s easy money policy created the housing bubble, the crash of which is at the heart of our current economic problems. Yet he reappointed Republican Ben Bernanke as chairman of the Federal Reserve rather than using the expiration of his term as an opportunity to break from the past and chart a new course by at least appointing a Democrat like San Francisco Fed President Janet Yellen.

….Finally, on health care, Obama never once blamed Bush and his party for ramming through a massive unfunded expansion of Medicare in 2003, which in part necessitated the Medicare cuts that were part of his health reform effort….In short, at every point Obama has failed to break sharply with the Bush administration. Indeed the Cato Institute has taken to calling Obama’s administration Bush’s third term.

There’s a lot to this, though I’d add that Reagan also passed his signature domestic initiatives — big tax cuts and defense spending increases — and rallied his base by firing the air traffic controllers. Obama hasn’t done any of that. But Bruce is right when he says that although Obama may be a liberal, “he is fundamentally a moderate — what we in Washington call a ‘goo-goo,’ a good government person, a pragmatist who deals with problems as they arise without seeing them as part of pattern of failure and without any preconceived idea of what should be done about them based on ideology or political philosophy.” That’s admirable in its way, but it doesn’t get things done in a hyperpartisan political swamp, and it doesn’t set up Obama to take credit for things when the economy gets better. Reagan worked hard to make sure that his tax cuts would be viewed as the driving force of recovery — though Paul Volcker’s interest rate cuts surely deserve most of the credit — but will Obama credibly be able to say that his stimulus package and bank bailouts were responsible for recovery when it appears this time? I doubt it.

I’m a fan of Obama’s, but this has always been his big blind spot. He came to office convinced — sincerely, it seems — that he could change the tone of Washington DC. That was always a fantasy. The way to get things done is to make a case for them, build public support for them, blast your enemies for opposing them, and just generally fight like hell for them. It can be done with a smile, but it has to be done. Obama seems to have a hard time getting that.