Today’s raging topic in the lefty blogosphere: is Mark Halperin merely a wanker? Or is he already Galactic Wanker of the Year a mere week into 2010?

The proximate cause of this conversation is his Time article, “A Report Card on Obama’s First Year.” Here’s what he says Obama did well: work with Congress, handle foreign policy, focus on the long term, take executive action, and steer clear of scandal. Not bad!

But here’s where he did less well: managing his image, creating administration stars, wooing the great and good, changing the tone, and managing the White House policy process. Hmmm. As pretty much everyone has commented, 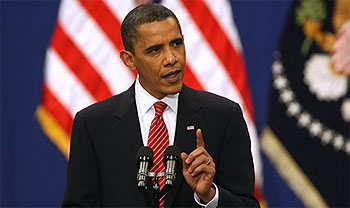 the good stuff is all substantive, while the bad stuff, with one exception, is all about optics and atmospherics. Do these lists really add up to an equal amount of good and bad?

Obviously not, although I think it’s worth defending Halperin in one narrow way: the world is what it is, and if the world is full of people who think that optics and atmospherics are a big deal, then optics and atmospherics are a big deal. Deal with it. Aside from that, though, the real question is whether Halperin is merely reporting this stuff or if he actively approves of it. Take this passage, from his bit about Obama failing to change the tone in Washington:

Once the new President cast his lot with his party in passing an economic-stimulus measure rather than seeking bipartisan agreement, rival Republicans started digging in. The White House’s original plan was to leverage Obama’s popularity and the agenda-setting power of the majority to force centrist Republicans to break ranks and cast cross-aisle votes on key measures — but the Administration underestimated the weakness of the opposition, which paradoxically strengthened the hand of the conservative activist grass roots, making compromise by GOP officials with the Democrats seem politically untenable. Obama’s aides continue to blame the Republicans for refusing to play ball, but the buck stops with the President, whose paths to success on issues such as climate control, jobs and education are all narrower because of a partisan bitterness that rivals that of the Clinton and Bush eras.

What to make of this? On the one hand, Halperin fails to mention that Obama agreed to let tax cuts make up 40% of the stimulus bill and still couldn’t get any Republican support. On the other hand, he pretty clearly lays the blame for this on weak Republicans who have become slaves to the most extreme part of their base. But then, on the third hand, he whipsaws back and suggests that it’s all Obama’s fault anyway, because, well, he’s the president. If he wants to be successful, then one way or another he needs to figure out a way to make Republicans play ball.

But is Halperin saying this is how things ought to be, or is he merely reporting that, like it or not, this is the way things are? Beats me. It gets harder and harder to tell at places like Time these days. In any case, maybe Halperin should follow up with a list of five things the media and the Beltway glitterati are doing better than you think — and five things they’re doing worse. That would be some serious link bait.