Should homeowners who are underwater on their mortgages just walk away the same way a business would if it were broke? Or should they try their uttermost to fulfill their promises, giving up only as an absolute last resort? Both Megan McArdle and Steve Randy Waldman agree that what’s at issue here are social norms that we should tamper with gingerly if at all.  Megan says this means borrowers 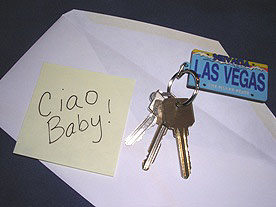 should do everything they can to repay mortgages even if it doesn’t make financial sense:

Someone who borrowed money to buy a house in 2006 was borrowing money under the tacit moral norms of the time.  And in that normative system, it is customary and expected that people who borrow money to buy a home, will attempt to pay it back to the best of their ability, and not just walk away because they no longer feel like paying the mortgage.

….If people attached no moral force to debt repayment […] lending standards would be vastly tighter, and much more dependent on personal relationships with bankers, which sounds all twee and sweet and community oriented but also used to quite firmly restrict access to capital to more affluent citizens who had longstanding relationships with a bank (or had cosigners who did).  It is doubtful that non-recourse mortgages could continue to exist long term — either the law would change, or the mortgage market would shrink dramatically.  Bankruptcy laws would probably become tighter, because unlike the (mostly) dreadful 2005 reform, bankers would have a valid case that loose bankruptcy was curtailing credit access too much.  Trivial blemishes on your credit score would mean that you probably couldn’t get a mortgage.  The federally guaranteed mortgage debt business would probably get the same treatment that we have given tax debts and federally guaranteed student loans, which is to say that if the losses became too high, Congress would probably pass a law making it impossible to discharge those debts in bankruptcy.

Steve thinks the moral argument is more forceful on the other side of the lender-borrower relationship:

We have, and have long had, the expression “it’s just business”. When spoken by one businessman to another in the context of even a tragic transaction, like calling in a loan that will force a firm to fold, we recognize the words as legitimate, a kind of apology. But if a businessman uses the same phrase while creating trouble for an individual in her role as customer, tenant, or borrower, it marks the businessman as, well, a jerk (to use McArdle’s very excellent descriptor)….There have always been businesses that sought every legal cover to profitably mistreat people. But such businesses used to be disreputable.

….As McArdle acknowledges (I think) with respect to revolving debt, over the past few decades the financial industry has increasingly applied the norms of hard-nosed business to its interactions with customers….Along a whole variety of dimensions, the financial industry has increasingly violated those expectations. Lenders drafted contracts with fees and other “revenue enhancers” that borrowers are unlikely to fully understand, and profited when borrowers managed them poorly. They enthusiastically marketed loans to individuals whom they were perfectly able to foresee could not easily bear the debt, against collateral whose valuation they knew to be dodgy, then sold those loans via circuitous paths to investors who literally could not know what they were buying.

….I think that underwater homeowners ought to walk away from their loans for the very same reason McArdle want us to consider them jerks for doing so. We both want to see norms we consider valuable enforced. I think that banks violated a great many norms of prudence and fair dealing in their practices during the credit bubble, and that they violate the fundamental norm of reciprocity by fully exploiting their own legal rights while insisting that borrowers have a moral obligation not to exercise a contractual option. In order to strengthen norms I consider crucial, I hope transgressors face legal and social consequences (strategic default and reduced shame attached to default) that will alter their behavior going forward.

I’m going to punt. We have a pretty good idea of what happens when norms break down on the lender side (housing bubble, big crash, huge recession, etc.), but we don’t have a very good idea of what would happen if borrower norms broke down even further than they did during the bubble. Tentatively, then, I’d side with Steve: better to deal firmly with the devil we know than to worry overmuch about the devil we’re only guessing at, especially when devil #1 is the far more knowledgable and deep-pocketed one. That said, I think both Megan and Steve make good and intriguing points, and I don’t feel like I’ve thought about this long enough to take a firm stand on either side.  But it’s a good conversation, worth reading in full. Here it is: Megan #1, Steve #1, Megan #2, Steve #2.