When you have a progressive tax system, especially when there are surcharges on people making seven-figure incomes, you also have a system where for any given level of national income, the greater the inequality, the greater the government’s tax revenues. And indeed federal revenues have been rising faster than median wages for decades now, thanks to the rich getting ever richer.

Given the government’s insatiable appetite for cash, it’s only natural that it would prefer to tax plutocrats, spending some of that money on poorer Americans, rather than move to a world where poorer Americans earn more (but still don’t pay that much in taxes), and the plutocrats earn less, depriving the national fisc of untold billions in revenue.

The government’s interests, then, are naturally aligned with those of the plutocrats — and when that happens, the chances of change naturally drop to zero. 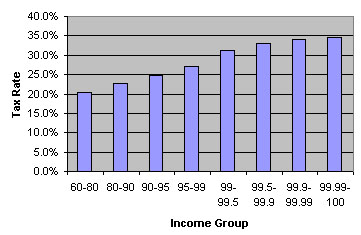 This is true.  But it’s not very true.  To see why, take a look at how progressive the federal tax system is.  The chart on the right is from a 2004 paper by Piketty and Saez, and it shows the total federal tax rate (income tax, payroll tax, etc.) for various income groups.1  As you can see, it’s progressive, but it’s not that progressive.  And that makes a difference.

Here’s why: although the top 1% (the four richest groups in the chart) has a lot of income, the 60-80th percentile has about the same amount.  That’s because although their incomes are a lot lower, there are a lot more of them.  So what happens if that group loses, say, 10% of its income and it goes instead to the very tippy-top earners?  Answer: total revenue to the government goes up about 1%.  The same is roughly true for the other income groups as well.

In other words, the federal government doesn’t have much of an incentive to maintain lots of income inequality.  Not much fiscal incentive anyway.  For the most part, the political incentives swamp the fiscal ones, and unfortunately they aren’t very closely balanced.  Pursue policies that raise middle class wages, and the effect is so diffuse and so slow that hardly anyone notices.  Pursue policies that benefit the rich and you get immediately showered with oceans of campaign contributions.  That’s mostly what motivates our political economy, I think, not tiny changes in the total tax take based on changes in income inequality.2

1The chart starts at the 60th percentile because, basically, there’s hardly any income to tax below that.  This is mostly an argument about the middle class vs. the rich.

2Plus, of course, the fact that the rich basically control the country and have an entire political party dedicated to their interests.  But that’s a whole different post.