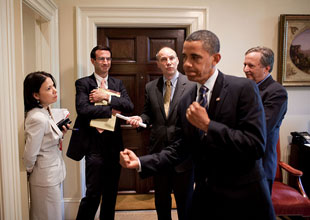 With the public option now out of the healthcare bill, is it still worth passing?  Regular readers will be unsurprised that I think the answer is pretty firmly yes—and that liberals who now want to pick up their toys and hand reform its sixth defeat in the past century need to wake up and smell the decaf.  Politics sucks.  It always has.  But the bill in front of us—messy, incomplete, and replete with bribes to every interest group imaginable—is still well worth passing.  First, here’s me a few months ago:

If you combine (a) Medicare, (b) our current employer-based insurance regime, and (c) community rating along with subsidies for low-income families, you’ve essentially institutionalized universal healthcare insurance.  Not everyone will take advantage of it—there will always be a few people who go without coverage even if it’s affordable—and you still a need a few other things like out-of-pocket caps.  Still, it’s basically a statement that everyone in the country can and should be covered.  And once that becomes a cultural norm, it will never go away.

Even without the public option, which can be added on to the current legislative framework later if we stay on the ball and scrape up the votes for it, we’re still getting community rating and subsidies for low- and middle-income families.  That’s huge.  And here’s Ezra Klein:

“This is a good bill,” Sen. Sherrod Brown said on Countdown last night. “Not a great bill, but a good bill.” That’s about right. But the other piece to remember is that more than it’s a good bill, it’s a good start. With $900 billion in subsidies already in place, it’s easier to add another hundred billion later, if we need it, than it would be to pass $1 trillion in subsidies in 2011. With the exchanges built and private insurers unable to hold down costs, it’s easier to argue for adding a strong public option to the market than it was before we’d tried regulation and a new competitive structure. With 95 percent of the country covered, it’s easier to go the final 5 percent. And with a health-care reform bill actually passed, it’s easier to convince legislators that passing such bills is possible.

On its own terms, the bill is the most important social policy achievement since the Great Society. It will save a lot of lives and prevent a lot of suffering.

Ten years ago this bill would have seemed a godsend.  The fact that it doesn’t now is a reflection of higher aspirations from the left, and that’s great.  It demonstrates a resurgence of liberalism that’s long overdue.  But this is still a huge achievement that will benefits tens of millions of people in very concrete ways and will do it without expanding our long-term deficit.  Either with or without a public option, this is more than Bill Clinton ever did, more than Teddy Kennedy did, more than LBJ did, more than Truman did, and more than FDR did.  There won’t be many other times in our lives any of us will be able to say that.  So pass the bill.  The longer we wait, the worse it will get.  Pass it now.