Matt Yglesias and Kevin Drum are defending the elimination of the filibuster on the grounds that unpopular legislation will fail even if a majority of legislators are behind it.

I didn’t say anything remotely like that.1  I don’t think Matt did either, at least not in the linked post.  But it gets even weirder after that:

I find it interesting that a major word is missing from the discussion: abortion.  The most successful Democratic use of the filibuster has, of course, been against judges who might overturn Roe v. Wade.  If it weren’t for the filibuster, it’s pretty likely that a play to overturn Roe would even now be wending its way through the courts, to a probably-successful conclusion.  Other treasured liberal programs like affirmative action, and certain kinds of environmental regulations, would probably also be in serious danger.

During the Bush era, Democrats filibustered — what?  Ten appellate judges?  And not all of them because of their views on abortion.  In what way has this prevented a challenge to Roe v. Wade from wending its way through the courts?  There are plenty of circuits with conservative majorities on them, after all.  Next: 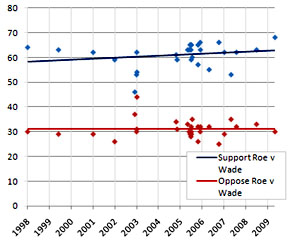 Why is abortion missing from this discussion, especially when it is currently more central to our main public policy debate than the filibuster?  The filibuster has allowed Democrats to impose a minority view of abortion rights on the country; saying that unpopular legislation tends to fail is true, but not complete, because that is not the most powerful effect to which Democrats have used it.

It’s true that polling on abortion attitudes is highly sensitive to question wording, but one of the simplest and cleanest questions is, “Do you support or oppose Roe v. Wade?”  Nate Silver’s chart on the right, which aggregates multiple polls, shows the trend on this question clearly: whatever else the American public thinks about abortion, it supports Roe v. Wade by the whopping margin of 2:1.  If Roe ever gets overturned, it certainly won’t be because that’s what the majority of Americans want.

1For the record, I oppose the filibuster because I think it’s unconstitutional.