The shiny new toy du jour for the conservative movement is the Great NEA Conference Call Scandal.  Unless I’m missing something, here’s what happened: a White House flack and an NEA flack arranged a conference call with a bunch of 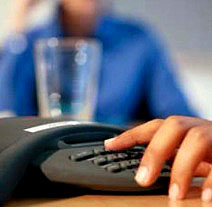 artists and encouraged them to create artwork in support of the president’s National Day of Service.  That’s, um, about it.  But conservatives are going absolutely ape over it.  Freddie can’t take it anymore:

Yes, that’s it. That’s that horrible piece of unAmerican propaganda currently poisoning our government and causing Lady Liberty to weep bitter tears….What’s there is precisely the kind of vague, empty bureaucrat speak that suffuses not only every branch of government, regardless of the party of the sitting president, but also every corporate conference call promoting “synergy” and collective effort for collective goals.

….As SEK from the Edge of the American West blog says, the actual ends that this call is trying to achieve are an increase in community service, such as seeing more young people at blood drives. This is the alleyway the drunken husk of conservatism has crawled into, opposing service to one’s country and community as tantamount to socialism.

Now, that’s what matters — the fact that what was said was absurdly trivial, and that the conservatives screaming and carrying on like they’ve found a dead body in Joe Biden’s trunk are actually completely wrong about what they think the call is about. But, yes, the hypocrisy rankles. It does indeed bother me that the ideology responsible for having people sign written pledges declaring their support for President Bush before they see our elected officials speak now complains about this. It does indeed piss me off that a few short years ago, Republicans were routinely doing things like calling for Howard Dean’s hanging for criticizing the war in Iraq, and yet now they stand enraged over this meaningless conference call.

You know, we saw the same thing happen after conservatives helped expose the forged memos that Dan Rather touted on 60 Minutes.  For about two years after that, conservative bloggers saw forgeries everywhere.  Forged photos.  Forged documents.  Forged pieces of paper from senators’ pockets.  They were so intent on recreating their most glorious moment that everything they saw became another potential Rathergate.

This has the same feel.  The ACORN sting was a brilliant piece of political theater.  Not exactly critical to the freedom of the Republic or anything, but certainly something that very entertainingly did some real damage to a liberal group that had been in conservative gunsights for years.  But since nobody really cares all that much about ACORN, the beast needs to be fed again.  And again.  And so they come up with stuff like this: a transcript of a phone call that, at most, suggests a minuscule bit of bad judgment from a couple of low-level flacks.

But there’s good news here for liberals: if this is the direction Breitbart and Glenn Beck and the rest of the crew are going, they’ll soon be taken about as seriously as Abbie Hoffman and the Yippies.  The first stunt is kind of cool.  The second one, not so much.  The third one is a yawn.  There’s just no there there.  Unless there’s another shoe to drop on the NEA call, this is a nothingburger.

But this won’t be the end of it.  The old admonition to always leave ’em wanting more is good advice for any kind of theater, including political theater, but I don’t think the wingers get that.  They should have quit while they were ahead.