A few days ago I noted that legislative “triggers” have a long history of sounding good but not really working.  Either nobody likes the idea in the first place or else they turn out to be toothless in the crunch. Over at Slate, Tim Noah takes a closer look and agrees: triggers are mostly just a bunch of flimflam: 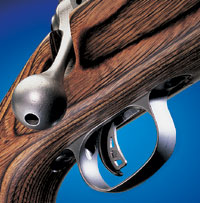 Legislative triggers have an especially dismal history in health care policy, argues Timothy S. Jost, a law professor at Washington and Lee. In 1996 the Health Insurance Portability and Accountability Act required states to impose health-insurance reforms similar to those proposed in the current health reform bill; if the states failed to act, the federal department of Health and Human Services would impose them. States failed to implement reforms—and so did HHS.

In 2003, when Congress added a drug benefit to Medicare, it worried that its new program to provide coverage through private plans subsidized heavily by the government would prove ineffective. But a trigger to end the program focused only on whether these private plans would serve all regions of the country, which they did. The trigger failed to address the real problems that emerged: fraud, abrupt changes in formularies and drug charges after beneficiaries signed up, and high costs.

Meanwhile, a separate trigger in the bill required the president to address projected shortfalls within 15 days of receiving notice that 45 percent or more of Medicare funding was drawing down general revenues. Congress would then appropriate the necessary additional funds under an expedited procedure. But when President Bush notified Congress in 2006 that the 45 percent threshold had been exceeded, Congress did nothing. The threshold has been exceeded every year since then. Congress continues to do nothing.

So do triggers ever work?  According to Noah, the only clear success story has been with base closings: the 1990 base closing bill created a commission to recommend closures, with the closings to be automatically triggered unless Congress objected within 45 days.  It didn’t, and the bases were closed.

That’s better than nothing, I guess, but Noah seems on pretty firm ground when he says that a public option trigger in the healthcare bill would probably be little more than window dressing.  When the time comes, Congress will still have to define what the public option should look like, and that will require congressional action.  There’s nothing automatic about it, trigger or no trigger.

Still, a trigger is probably better than nothing, especially if its requirements are spelled out in sharp detail.  Even if, practically speaking, nothing happens unless Congress acts, the existence of a clear formula would at least provide supporters with a hook for demanding action down the road.  In all likelihood, though, that’s all it would be: a way to guarantee that the public option gets renewed attention someday.  But whether it’s now or later, it’s still going to have to get enough votes to land on the president’s desk.  If that’s where we end up, let’s just make sure the trigger has a short enough fuse that it lands on this president’s desk.