The New York Times has a nice front page piece today about overdraft fees on debit cards, and for the most part it’s the usual horror show: the fees are outrageously high; banks deliberately arrange them so that you always pay the maximum number of fees, not the minimum; an enormous fraction of their operating profit now comes from overdraft fees; 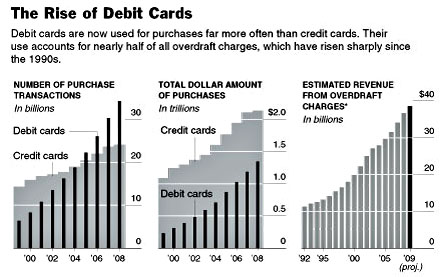 and they actively adopt policies designed to encourage overuse of debit cards.  And naturally this hits the hardest among those who are the most financially stressed in the first place: 93% of all overdraft charges come from 14% of bank customers, most of them lower-income consumers.

That’s all blood-boiling stuff, but it’s also been pretty well covered over the past year or two.  However, I did learn a couple of new things from this piece.  First, I always figured that as bad as the overdraft racket was, at least you could opt out if you want and just have the bank turn down any debit that would take your account below zero.  Nobody ever does it, but in theory you have the option.  Right?  Wrong:

Ruth Holton-Hodson discovered that the hard way. She keeps close tabs on the welfare of her brother, who lives in a halfway house in Maryland and uses what little he has in his account at Bank of America to pay rent and buy an occasional pack of cigarettes or a sandwich.

When the brother, who has a mental illness that she says requires her to assist with his finances, started falling behind on rent, Ms. Holton-Hodson found he had racked up more than $300 in debit card overdraft fees in three months, including a $35 one for exceeding his balance by 79 cents.

Ms. Holton-Hodson said she spent two years asking bank employees if her brother could get a card that would not allow him to spend more than he had. Though Bank of America does not typically allow customers to opt out of overdraft protection, it finally granted an exemption.

“I’ve been angered and outraged for many years,” she said. “When there is no money in his account, he shouldn’t be able to pay.”

Go ahead and try to defend that.  I dare you.  And then there’s this:

In 2005, after intense industry pressure, the Federal Reserve ruled that overdraft charges should not be covered by the Truth in Lending Act. That meant bankers did not have to seek consumers’ permission to sign them up, nor did they have to disclose the equivalent interest rate for the fees.

Well, of course the Fed ruled that way.  Just because banks are charging the equivalent of 3,000% interest on these fees is no reason to force banks to disclose that fact to customers.  That’s our Fed!

But maybe the worst aspect of the whole thing is the almost unbearable smarminess of the bank lobbyist who blew off the whole subject with this: “Everyone should know how much they have in their account and manage their funds well to avoid those fees,” Scott Talbott told the Times.  There’s a circle in hell reserved for this guy.