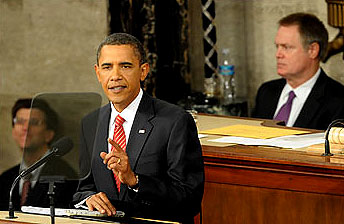 The relentless attempt to appear bipartisan was kind of grating.  I mean, how many Republicans did he end up namechecking by the time he was done?  Sheesh.  Still, he wasn’t trying to please me, and I imagine this kind of stuff goes over pretty well with the average viewer.

Props for not sidestepping the whole individual mandate issue.  I sort of expected him to, since requiring people to buy insurance isn’t necessarily a popular position, but he met it head on.  Key quote about people who choose to stay uncovered even if they can afford insurance: “Such irresponsible behavior costs all the rest of us money.”  I’m not sure it will work, but it was admirably direct.

He waffled at first on the public option (“These are all constructive ideas worth exploring,” he said unctuously about competing proposals), but then he finished up strong: “I will not back down on the basic principle that if Americans can’t find affordable coverage, we will provide you with a choice.”  But was this as strong as it sounded in real time?  Not really, and I think he left things pretty fuzzy about just how vigorously he’s planning to push for a serious public option — which I suppose was exactly his intention.

He did a pretty good job calling out some of the ridiculous lies that have been spread about healthcare reform.  This is where his (sometimes annoying!) focus on post-partisanship and “ending the ideological bickering” can pay off.  It allows him to get away with strong criticism of this stuff without seeming merely partisan himself.

There was no mention of subsidy levels in his speech.  This is no surprise, since that’s an ultra-wonky technical detail, but it’s also a pretty important one.  Even if it’s just in some talking points released on the website, I’d like to hear where he stands on this.

When Obama said at the end that Americans had been sharing their stories in emails and letters and that he had “received one of those letters a few days ago,” I was ready to start cringing.  But no!  It was a letter from Ted Kennedy.  That turned out to be a pretty powerful part of the speech, I thought.  Too bad he then weakened the impact by going on just a wee bit too long afterward.  Another minute would have been good.  Three or four minutes was too much.

And the big question: will it work?  Well, I’ve been on record for some time as believing that since healthcare reform emerged still standing even after the August hailstorm, the odds were good that it could pass this year in some reasonable form.  So obviously I still think that.  But I’d say the speech probably helped.  It won’t affect Republican votes much, but it will probably move public opinon a few notches and make it easier for centrist Dems to stick together and overcome a GOP filibuster.  Basically, I’d say the odds of healthcare passing this year have gone up from 65% to about 75%.  Stay tuned.