Apparently the LA Times has some kind of moronic deal that allows them to reprint Ron Brownstein’s columns in their print edition but not online.  So it’s off to National Journal to see Brownstein’s latest, ripped straight from the blogosphere and therefore old news to everyone here (Republicans are the Party of No; 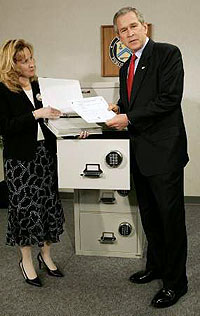 old-style coalitions have broken down; we’re moving to a de facto parliamentary system; etc. etc.).  It’s basically fine, though, except for this one paragraph that’s become pundit conventional wisdom lately:

I understand why people write stuff like this, and the parallels are strong enough to make it defensible.  But is it really true?

Maybe I’m remembering things through partisan-colored glasses, but my recollection is that there are some pretty significant differences here.  First, George Bush never sought out any compromise at all.  He insisted on a pure, budget-busting carve-out privatization scheme and never gave Democrats so much as a chance to make a deal.  But what if he’d made it clear that he was open to compromise?  Say, part carve-out, part add-on, and with a modest collection of benefit cuts and tax increases to go along with it?  I suspect a lot of Dems would have been open to something like that, but Bush never gave them a chance.

Second, it wasn’t just Democratic opposition that killed Social Security privatization.  Thanks to Bush’s intransigence, his plan became so radioactive that even a lot of Republicans didn’t support it.  By the time Congress returned from its summer recess, it was obviously DOA and no bill was even introduced.

There are obvious superficial similarities between Social Security in 2005 and healthcare reform in 2009.  But in the former, Bush outlined a purely conservative proposal and never gave an inch on it.  In the latter, Obama has outlined a generally liberal proposal but allowed some give and take with Republicans.  As Brownstein himself mentions, the plan’s basic structure has support “from such Republican-leaning groups as hospitals, drug manufacturers, and the American Medical Association, which fought almost all previous reform efforts. Obama told the AMA last summer that he is open to some medical-malpractice reform, a top Republican priority. And for months, he has signaled his willingness to retrench on creating a public competitor to private insurance companies, the idea that most enrages conservatives.”

The Social Security comparison will probably never go away because it’s just too good a story.  Too good to check, in fact.  But it’s only half true.  The punditocracy really ought to stop peddling it.