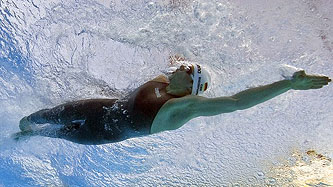 Alex Tabarrok comments on the arms race in swimsuits that’s caused world records to topple like dominos over the past couple of years:

The phrase I elided in the first sentence was “and trading systems.”  Alex is analogizing swimsuits to high-frequency trading, which he suggests is societally wasteful: it’s not making stock trading any more efficient, it’s just changing who gets the money.  The same is true of much modern financial innovation:

High frequency trading is a good example of this.  Taken by itself, it’s probably not that big a deal.  In the great scheme of things, the amount of money involved is small and the price paid by ordinary traders is microscopic.  Still, it’s a pretty good symbol of what’s wrong with the modern finance industry.  Even the CEO of a cigarette company can come up with something good to say about his product, but supporters of HFT mostly come up blank.  They mumble a bit about providing liquidity to the market, but it’s obvious that even they don’t really believe what they’re saying.  In the end, HFT has a gem-like clarity to it: it’s an unadulterated example of clever investors figuring out a way to siphon off cash from everyone else by manipulating the system in a way that has no relevance at all to the real world.  It’s finance as pure game.

Others have made this point repeatedly and in better ways, but the entire purpose of the finance industry is to oil the gears of the business world.  Nobody objects (much) to Wall Street bankers earning their paychecks from things that do just that: loaning money, helping companies go public, underwriting bond issues, and just generally allocating capital where it can do the most good.  But when those become mere afterthoughts to the real money spinners — CDOs, credit default swaps, option ARMs, HFT, rocket science interest rate plays — all of which are almost completely divorced from providing more efficient services to the outside world, then the outside world starts to wonder what’s going on.  As they should.  We need a finance industry that’s about half the size it currently is and focused on providing actual financial services to the rest of us.  Until we get it, all we’re doing is spending a lot of money on high-tech swimsuits instead of spending money on actually swimming better.