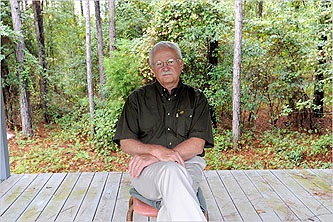 He skipped the antiwar protests of his college years, took a job as a regional salesman of paper and chemical products, and built for himself a quiet life of family and church (and hunting and fishing) in his rural hometown in southwest Georgia.

But on Thursday, Mr. Collier drove more than an hour down Route 19 to attend a health care forum in Albany, Ga., being held by his congressman, Representative Sanford D. Bishop Jr., a Democrat serving his ninth term.

To his wife’s astonishment, as the session drew into its third hour, Mr. Collier rose to take the microphone and firmly, but courteously, urged Mr. Bishop to oppose the health care legislation being written in Washington.

….The town-hall-style meetings that have so defined the national health care debate during this month’s Congressional recess have produced an endless video loop of high-decibel rants. In many instances, the din has overwhelmed the calmer, more reasoned voices of people like Bob and Susan Collier, who came to Mr. Bishop’s meeting not because they had received an electronic call to action but because they had read about it in The Macon Telegraph.

Bob Collier.  Just an average guy.  Minds his own business.  Hardly a political bone in his body.  Concerned about healthcare, but in a calmer, more reasoned way than all those right-wing loons.  Gets his news from the Macon Telegraph.  Bob Collier is just a normal guy trying to make up his mind about a complex issue.  Or maybe not:

The Colliers are committed conservatives who have voted Republican in presidential elections since 1980. They receive much of their information from Fox News, Rush Limbaugh’s radio program and Matt Drudge’s Web site. But they said their direct experience with the health care system had persuaded them of the need for change.

For chrissake.  If the New York Times wants to write a story that dives into the worldview of a committed right-winger who gets his news from Sean and Rush, that’s fine.  There’s no reason that can’t be an interesting story.  But if that’s what you’re doing, why would you spend the first 500 words of the piece trying to convince us that your subject is just an average, nonpolitical, nonopinionated regular guy?  He’s not.  He’s quite plainly a committed right-winger, the same way I’m a committed left-winger.  There’s nothing average about him.

But he’s opposed to Obama’s healthcare reform and he’s not a loudmouth loon.  So that makes him a front page spokesman for the heartland, I guess.  Nice work if you can get it.